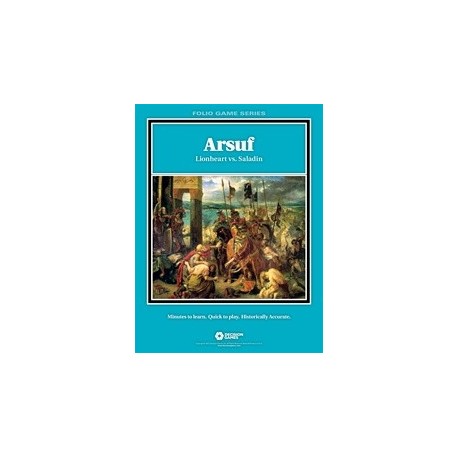 As the Third Crusade drags on, the Crusaders can make no headway to reach the Levantine interior against Saladin’s highly mobile Arab army; but Saladin cannot generate enough power to break the Crusaders and recapture coastal cities. In the summer of 1191, Richard the Lionheart leads a Crusader army south along the coast, intending  eventually to turn east toward Jerusalem. Saladin, hoping to catch the Crusaders strung out on the march — as he had done four years earlier at Hattin — prepares to launch a strike near the ruined city of Jaffa. But, Richard, anticipating the attack, musters his army in a tight formation but continues to march nonetheless. On the morning of 7 September, Saladin strikes. Arsuf uses the new Battles of the Medieval World system, a variation on the venerable Battles of the Ancient World system. The battle is dominated by masses of heavy cavalry and disciplined lines of heavily-armed and armored men-at-arms. Swirling around these forces are masses of foot- and horse-archers, whose purpose is to disrupt the heavy formations to make them easy prey for their counterparts. Using the classic Combat Results Table, the fighting is close and bloody until the morale of one side weakens. Once a line breaks, the victor must pursue ruthlessly to prevent a rally. Leaders enhance combat power and restore broken formations.Arsuf is a contest of nimble Arab archers against stout Crusader men-at-arms, backed by the cream of European chivalry. Victory will go to the player who deploys to best utilize his strengths and take advantage of enemy weaknesses.