Against the Odds 21 : Day of the chariot - Kadesh 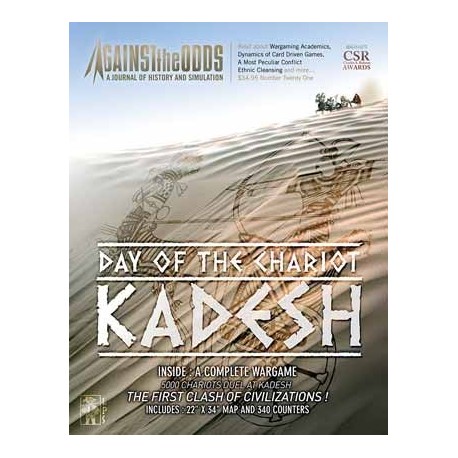 En savoir plus sur Against the Odds 21 : Day of the chariot - Kadesh

Miniature armies - carefully painted and labeled with unit names, strengths, and abilities - have been found in Egyptian tombs, suggesting that "wargaming" goes back a long time.

Of those miniature armies, no units take more precedence than the chariots - the "panzers" of their day. Keep in mind that horses of this period were too small to "ride" with a man on their back in a "cavalry" way. Only chariots offered a battle platform faster than sandals, and provided the "shock troops" of their day and a platform to designate the aristocracy and elite peoples. Alexander and the Roman legions might sneeze at chariot power... but not for another 900 years!

Kadesh must be the chariot battle of all time. Sources conflict and disagree, but there may have been as many as 5000 chariots in this twisted, confused, and bloody battle, fought to determine the borders between Egypt and the Hittite confederacy...

As an early example of "spin," Egyptian pharaoh Ramses II claimed a tremendous victory and the total vanquishing of the Hittite army... although he also signed a peace treaty that left the disputed city of Kadesh in the hands of the Hittites and never returned. Hmm. (A later and more formal treaty between Ramses and the next Hittite king is reproduced on the walls of the United Nations, as one of the first recorded international peace treaties. Ramses did not get Kadesh with that one either.)

Now you can take the reins and lead your lines/lions into battle. Day of the Chariot: Kadesh offers a classic design by Gene Dickens fully updated into a tactical view of one of the most-discussed battles of middle eastern history, with 340 double-sided counters, 30 minute turns, and everything you need to play a system emphasizing command control and flexibility (or the lack thereof). Three distinct scenarios provide the battle that did happen (according to Ramses), the battle that both sides had "prearranged" to happen, and the smaller, more confused battle that historians think actually did happen. (You may be surprised how different the "same" battle can be!)

Day of the Chariot: Kadesh and issue #21 of ATO