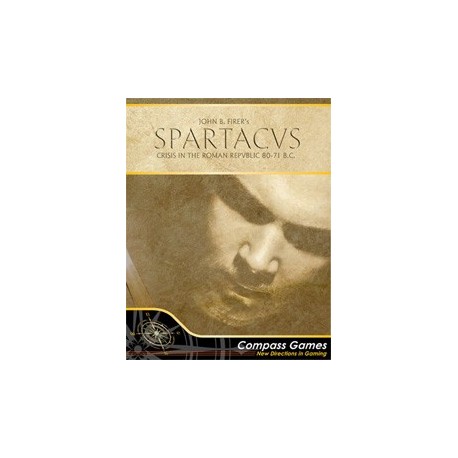 Rome - 80BC. The Republic stands on the threshold of a new era.

As Dictator, Lucius Cornelius Sulla has ousted the Marians, returned power to the Senate, and worked to restore the Republic to its former glory - but in his own...brutal way! Thus his reforms birthed violence and not peace, and rebellion is the watchword of the times.

Soon Rome will face a triple threat to its fragile stability: Sertorius will foment civil war from his lands in Spain; King Mithradates VI of Pontus will forge an alliance with Sertorius; and the ultimate insult - a slave revolt, led by an able gladiator-general named SPARTACVS.

SPARTACVS is a two player card-driven game pitting the might of Rome against the multi-threat Sertorians. This turbulent time plays out on a beautifully rendered point-to-point map covering Spain, Gaul, Italy and Asia Minor. The goal of the Sertorian players is to destroy the viability of the Republic - by taking Rome, its territories, or through pure will, forcing it to collapse from within. To prevent this, the Roman player must manage the crisis well both in military and political terms. Or better yet, wipe the traitors from the face of the earth with the fury of Mars!