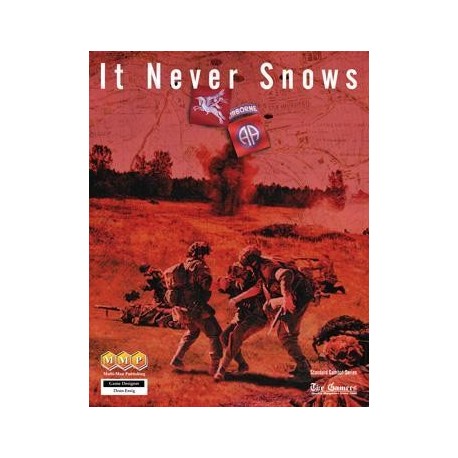 It Never Snows is a Standard Combat Series (SCS) game covering the pivotal Market Garden offensive in September, 1944. Using a system based on the well-received SCS Game Bastogne, It Never Snows covers the landings and ground offensive endeavoring to link up with them at 600m per hex with units generally companies. Each turn is half a day making for a 17 turn campaign game (uniquely playable among Market Garden games).

The expansive five map area allows each of the airborne division fights to be geographically isolated and separate, as was the case historically. What this does is that it allows each situation to be gamed as its own little tactical puzzle—making it such that a player might be “winning” in one region while “losing” in another, at the same time. Both players are always “in the game.”

While the Allied player is busy dropping paratroopers, establishing bridgeheads and running a ground offensive to link up with them, the German player must devastate the airborne forces clinging to Arnhem, defend the various river crossings and counterattack to sever the Allied supply lines. Both players are attacking and defending at the same time, every turn.

Following on the heels of Bastogne, It Never Snows uses a tactical model with a minimal amount of rules overhead which shows both set-piece as well as “on the fly” attacks and the effects of indirect fires and air support.

A fantastically detailed OOB shows the insane array of German units being scratched together to defeat the Allied offensive—from displaced sailors to the deaf, from elite armor to barely trained school units, from highly motivated SS to penal units being pushed into battle at gunpoint. Against the elite airborne troops of the Allies, this menagerie is hardly the German army many wargamers envision when they think of World War II.