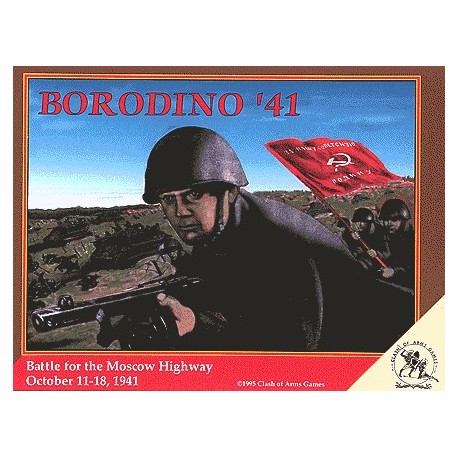 Based on the award winning Black Sea Black Death game system, Borodino '41 uses a map scale of 800 meters (one half mile) per hex, three or four impulses per daily turn, with infantry battalions and tanks and anti-tank guns by company (battery). The units are played mostly face down, with dummies, to recreate the Fog of War. Combat involves fire, and assault, which are influenced by troop morale, terrain effects, armor support, engineers, and various other specialized units. Included are some of the best troops of both sides, as well as Soviet reserve infantry, and tanks ranging from Pzkpfw IIIs and IVs, BT-7s, T-26s, T-34s, a few KV-1s, amphibious T-38s-even a T-28 Co without engines!

The game uses an updated version of the Black Sea system, with relatively little chrome and a high level of excitement. The impulse based game system keeps both players actively involved. Localized swings in initiative are common, and the situation preaents many counterattack options for the Soviet player, even though he is on the operational defensive.