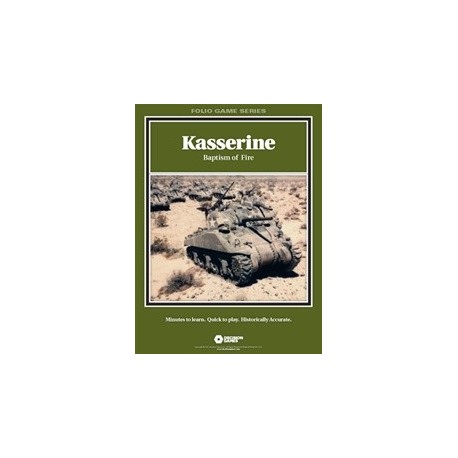 By February 1943, much of the inexperienced US II Corps had been deployed along the trails leading through a small canyon known as Kasserine Pass. The US commander, Gen. Lloyd Fredendall, had overextended his lead units, dividing them into individual, unsupported packets while disregarded his flanks. Rommel was quick to recognize the opportunity to inflict a defeat on the untested Americans, and he soon mounted an offensive with two panzer divisions.

Kasserine utilizes the new Fire & Movement combat system that’s designed so players can augment their units with “support fire” during the course of the turn. From artillery to dive bombers, units can receive support to engage enemy positions and formations, allowing combat to develop at all levels. A single recon battalion, for example — perhaps supported by mortars — could be tasked to assault a lone enemy infantry regiment defending a ridge. As that attack gets underway, however, the recon battalion may find itself advancing through a minefield. More support will be necessary to take the ridge, but assets are limited.

In Kasserine, the attritional design of the new Combat Results Table simulates the true nature of the battles in North Africa. Units are typically two-sided formations that can suffer casualties, accurately replicating the realities of combat and the high losses sustained by both sides during the actual fighting at Kasserine Pass. Winning is thus a matter of maneuver, firepower and asset management.