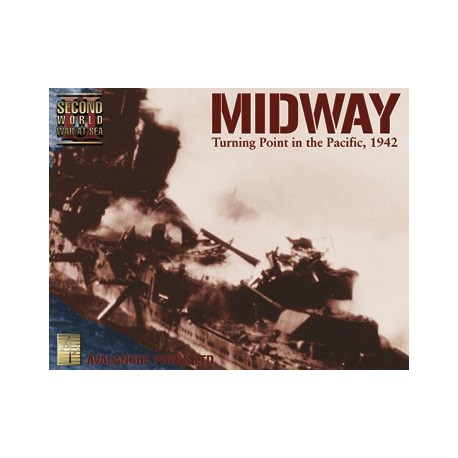 On the morning of 4 June 1942, fifteen TBD-1 Devastator bombers of Torpedo Squadron Eight took off from the USS Hornet to attack the Japanese carrier force operating off Midway Island. Fourteen of them were shot down as they pressed their attack, yet not a single pilot veered away. While Japanese fighters slaughtered the low-flying torpedo planes, American dive bombers passed overhead and began their screaming dives onto the Japanese carriers, sinking three of them and dooming the Japanese Empire. The sacrifice had not been in vain.

Both Japan and the United States had sought a final, decisive battle for control of the Pacific Ocean. When the Japanese unleashed their MI Sakusen plan to capture Midway Island in June 1942, the U.S. Navy was more than happy to meet them.

Midway covers the turning point of the Pacific War, with 11 separate scenarios, or game situations. These include the Battle of Midway in June 1942, the Wake Island relief operation of December 1941, the retaliatory raid on Wake Island in February-March 1942 and Pearl Harbor. There are options to allow the Japanese to bring in the forces historically allotted to the Aleutian Islands campaign instead of Midway, and the American battleship force that was not risked there but was available.

There are 210 "long" playing pieces, depicting the major fleet units of both sides: battleships, aircraft carriers, cruisers and fleet destroyers. There are also 280 square playing pieces, half the size of the ship pieces, mostly depicting aircraft but also smaller warships and markers.

The United States has her entire early-war Pacific Fleet, from the dreadnoughts of Battleship Row to the aircraft carriers that saved the world from fascist-imperialist domination. Aircraft like the F4F Wildcat and B17 Flying Fortress are present, as well as the Devastator.

The Japanese have their own battle line, headed by the incredible super-battleship Yamato. There's also the First Carrier Fleet of six modern first-line flattops, sporting the awesome Zero fighter and the famous Val and Kate bombers.

The operational map depicts the seas around Hawai'i and Midway Island.The tactical map is a generic blue field of hexagons, used to resolve surface combat. There, ships maneuver and fight using their gunnery and torpedo factors. Each player rolls a number of dice according to the ship's capabilities, hitting on a result of 6. Gunnery and torpedo damage tables give the results: ships can suffer damage to engines, hull or armament.

"Last Moments of Admiral Yamaguchi," Kita Renzo, 1942.
Rear Admiral Tamon Yamaguchi bids farewell to his staff.
He remained with his flagship Hiryu when she sank on 5 June 1942.