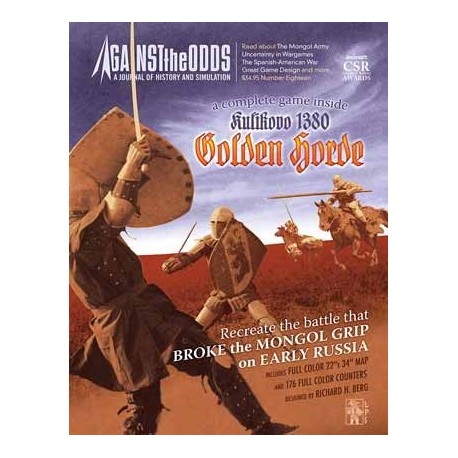 Kulikovo 1380 is a game covering the battle between the Golden Horde clan of Mongols and the collected principalities that we know as Russia under the growing leadership of Muscovy, and the Grand Prince of Moscow, Dmitri Ivanovich, later entitled Donskoi for his victory at Kulikovo (which is right near the Don River). For 150 years, Tartar armies had readily destroyed all Russian opposition, and Kulikovo was the first sign that Russia was starting to emerge from Tartar domination. It would take several centuries more.

Kulikovo is considered a major turning point/battle of the Middle Ages, in that it not only showed that a western-style, "heavy" army could defeat the Mongols, but it was also the first major step in the unification of the various Russian principalities under the leadership of Muscovy.

Kulikovo 1380 is an accessible, fast-playing, fun game of low complexity. Gamers who have played ATO's Suleiman the Magnificent (ATO #9) and/or GMT Games' Men Of Iron should find all of this quite familiar.