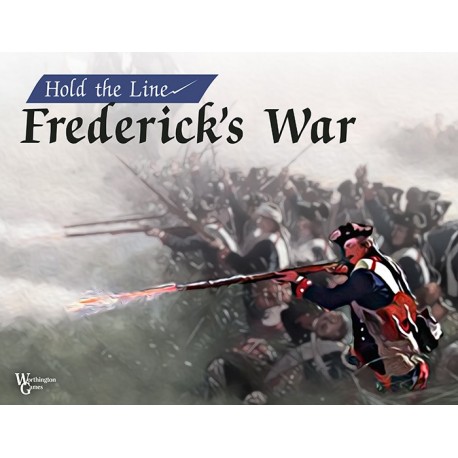 HOLD THE LINE comes to the wars of Europe in the Age of Reason with FREDERICK’S WAR. When Frederick II led his army into Silesia a long duel began between a still fragile Prussia and the first class power that was Austria. Featured here are eight battles from the fearsome contest: Mollwitz, Choutusitz, Hohenfriedburg, Kesselsdorf, Kolin, Leuthen, Hockkirk, and Liegnitz.

The game closely aligns with the Hold the Line system, but includes more advanced command rules, more detailed cavalry rules, optional rules for each warring nation’s units, and much more.

The Prussian army is well drilled and led by a bevy of talent generals, including Schwerin, Zieten, Leopold von Dessau, and of course Frederick the Great. The Austrian army is slightly weaker, but is aided by fearsome light infantry units and in later scenarios are led by such capable commanders as Daun and Loudon.

As Prussia can you humble the Austrians and make your kingdom a first-class power? As Austria can you weather the Prussian storm and halt the first steps towards decline? The enemy approaches, the sound of cannon deafens, men shout commands, smoke fills the air. You must HOLD THE LINE!

The game comes with a mounted 25 x 22 board, terrain tiles, unit counters, dice, and rule book.