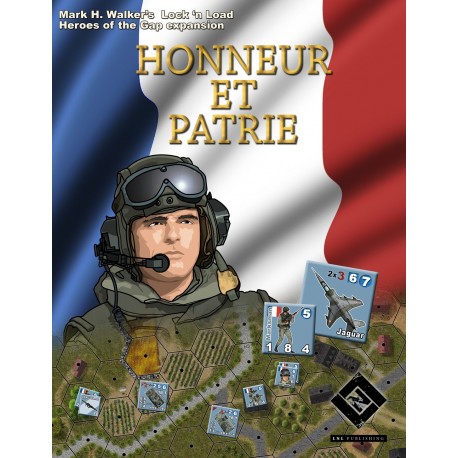 Honneur & Patrie is the first expansion for Lock ‘n Load: Heroes of the Gap. The expansion introduces the French army into the third war to end all wars. Highlighting the fighting in not only West Germany, but also right into Paris, Honneur & Patrie features French conscripts, the Foreign Legion, Paratroopers, and lots of tanks. You’ll match AMX30 B-2 tanks against the best Russian armor, direct Jaguar airstrikes, and recon enemy positions with ERC-90 and AMX 10RC armored cars (tanks?).

The expansion includes 12, story-driven scenarios and plays out on the boards of the popular Lock ‘n Load: Heroes of the Blitzkrieg. With a plethora of new counters, new scenarios, and a unique perspective on some of the most beautiful boards ever drawn for the Lock ‘n Load system, what’s not to like?

- Approximately 130 counters representing the infantry, leaders, support weapons, vehicles, helicopters, and planes of the French fighting forces. Includes over 50 vehicles, helicopters, and planes. Nine extra die-cut Belgian counters (including a German, experimental E-100 tank and two scenarios will be included in any Purchaser level order below). These will only be available through our site.

- All zipped up nice and neat in a durable zip-lock bag.