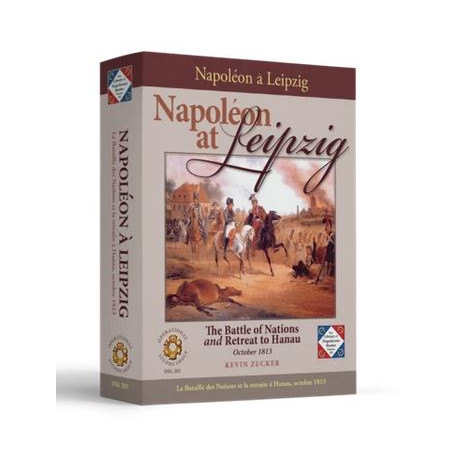 Napoleon at Leipzig is a comprehensive game with a proven track record of excellent re-playability, among the most popular Napoleonic wargames of all time with 20,000 copies in print across the first 4 editions. Now it has a bigger playing area and more manpower for both sides, all working within a smooth and efficient engine of 19th-century warfare.

SOME OF THE SURPRISES IN THIS EDITION
• Eleven additional hexrows of terrain—added to the top of the north and bottom of the south maps—provides 25% additional maneuver room for the armies.

• The reason Napoleon didn't build additional bridges for his army to escape—his Pontoon train was blocked from reaching Leipzig (This is covered by a card).

NEW! Hanau, Grande Armée in Retreat, 29-30 Oct
During the retreat after Leipzig one Bavarian and one Austrian corps were sent to block Napoleon's escape. DESCRIPTION
Napoleon's Last Battles System, in the Library of Napoleonic Battles Series : 480 meters per hex, 1 hour per turn, 400-800 men per strength point. Each Approach to Battle game lasts about 20 turns. The Full campaign lasts one week—over 50 turns!