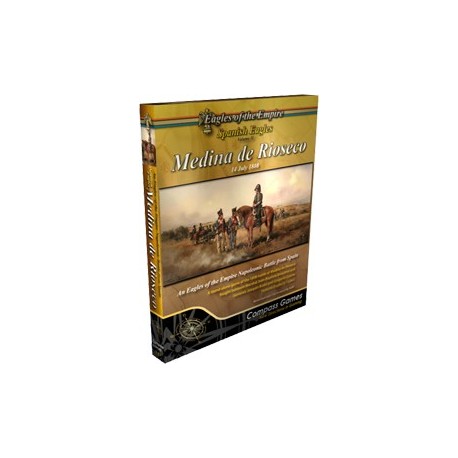 The Battle of Medina de Rioseco, 14 July 1808, was fought during Napoleon’s War in Spain between two Spanish Armies under the commands of General Joaquín Blake and General Gregorio García de la Cuesta, and Marshal Jean-Baptiste Bessières in which the Spanish force was defeated after a closely fought, but determined assault by the French.

Medina de Rioseco was the sole French triumph in the initial invasion of Spain, which failed to seize the country, ultimately requiring a fresh campaign by the Grand Armée under the command of Napoleon himself to (temporarily) secure Spain.

Medina de Rioseco is the sixth game in the Eagles of the Empire series, and is a stand-alone add-in battle to Spanish Eagles (Talavera, 27th and 28th of July 1809, and Albuera, 16th of May 1811.) and is completely playable by itself. Medina de Rioseco features both a historical and alternative battle that allows players to recreate the engagement as it was fought or to bring in additional Spanish forces available but not present at the battle. Game design by Brien Miller and Mark Searle.