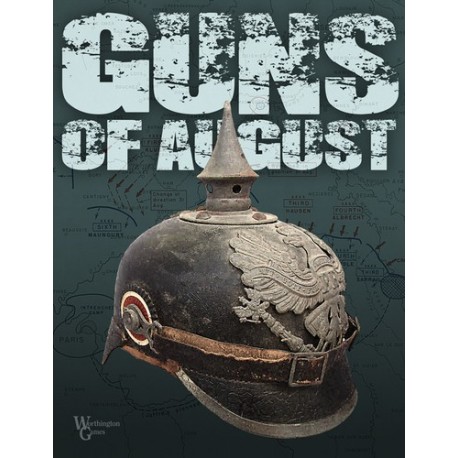 Ultimatum delivered by the German Ambassador at Brussels von Below Saleske, to M. Davignon, Belgian Minister for Foreign Affairs:

Reliable information has been received by the German Government to the effect that French forces intend to march on the line of the Meuse by Givet and Namur. This information leaves no doubt as to the intention of France to march through Belgian territory against Germany...

The GUNS OF AUGUST simulates the first three months of WWI in the West, when mobility reigned and the fate of France hung in the balance. Game mechanics compensate for players’ 20/20 hindsight to encourage historically accurate play that makes “sense” in game terms while avoiding a “straight jacket” of special rules to force irrational play. Players maneuver corps and divisions through 9-mile wide hexagons in turns that span three days each. Chit pull activation, along with modest movement point allowances, generates a highly interactive game. Combat uses artillery and rifles to reveal the comparative strengths of the opposing armies. Optional rules for variable set up and fog of war counters shroud the game in uncertainty and increase replay value.

“The lamps are going out all over Europe. We shall not see them lit again in our time”, Sir Edward Grey.