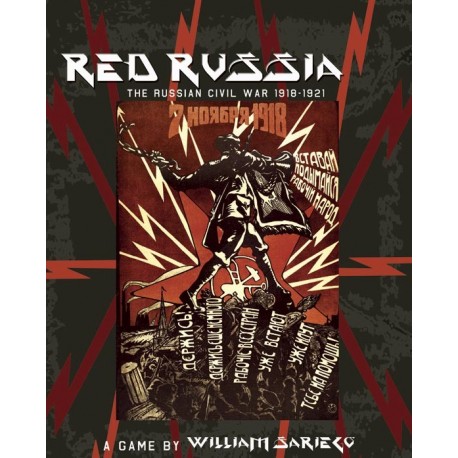 Life is beautiful. Let the future generations cleanse it of all evil, oppression and violence, and enjoy it to the full. — Leon Trotsky, February 27th, 1940

Between 1918 and 1921, violent upheavals wracked the former Russian Empire. Communism, monarchism, nationalism, anarchism and many other -isms vied for control of the Tsar’s domains. When the war finally ended, the “Red” faction emerged victorious, but it was a hollow victory. Economic output had fallen by 96 percent compared to 1913’s figures, agriculture was down by 63 percent, and $35 billion worth of damage had been done. Millions had died; to this day no one is exactly sure how many.

In Red Russia, designer William “Defiant Russia” Sariego takes the popular game system from Soldier Kings to this decisive moment in history. Players represent from two to five factions: the Reds (Communists), Allied Interventionists, Siberian Whites (monarchists), Southern Whites or Northern Whites. The game is played in turns representing a season of the year (three months). It begins with the summer turn of 1918, and ends with the conclusion of the spring 1921 turn. A full game without an Automatic Victory is thus 12 turns long.

Players command infantry and cavalry armies, and for some factions fleets and aircraft. The Allied Interventionists also have a tank unit. Leaders assist these units in movement and combat, ranging in quality from Wrangel of the Whites and Trotsky of the Reds on down to the hapless Sergei Kamenev of the Reds.

As with the “Soldier” games, the map is divided into land areas and sea zones. Armies move on land, fleets at sea. Each land area is rated for the amount of money and manpower it generates each turn. Manpower represents not just fresh recruits for your forces, but also the things made with human labor: food, uniforms, weapons and so on. Money is, well, money. You expend manpower to rebuild your forces, and money to finance their actions. Thus you need to hang on to areas that generate these resources for you, and take them from the other guy.

Throwing a twist into all of this are random events, shown through the 55 high-quality playing cards, by far the best we've ever put into one of our games. The universe is loaded with random elements; life does not unfold as an orderly series of “phases.”