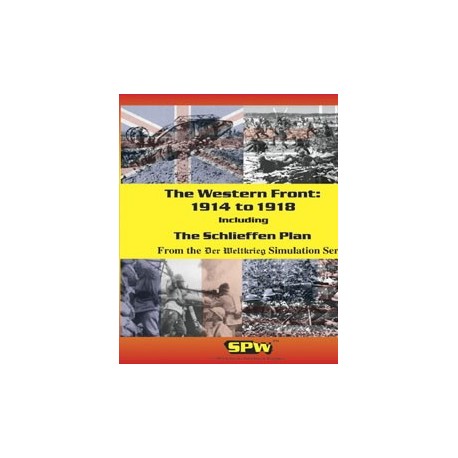 August 1914  War has come. Germany is faced with mortal enemies on two fronts. She must eliminate one threat or face being crushed between the two. The German strategist von Schlieffen plans one of the great military gambles of all time. His scheme is to concentrate to knock France out of the war before Russia can bring her armed masses to bear.

The bulk of German forces will move through neutral and lightly defended Belgium. Graf von Schlieffen intends to fall on the flank and rear of the French armies. He believes the French will over commit to regaining the lost provinces of Alsace and Lorraine.

The Schlieffen plan runs afoul of complications from the moment it is launched. The Belgians fight back. The British join the fray. The French begin to display operational flexibility. Meanwhile the Kaiser and his advisors balk at the risk being accepted in the East.

Can the invading German armies still defeat France? Or will the French, British and Belgians stop them? This time it is up to you.

May 1915 The immediate threat to France is over. The Germans have re-deployed substantial forces to the eastern front. French and British reinforcements continue to arriving in increasingly substantial numbers. The French believe the opportunity has come to expel the invaders. But both sides have used the lull since 1914 to dig in. Trench lines stretch from Switzerland to the English Channel. The Germans may be weaker, but they stand inside the most extensive field fortifications the world has yet seen.

February 1916 The Germans have substantially reduced the Russian threat by their Polish Campaigns of 1915. Now the German Chief of Staff, von Falkenhayn, believes he can eliminate France through a protracted battle of attrition. The fortress complex of Verdun is chosen as the target the French will defend to the death. An epic struggle that will sear the minds and bodies of both nations begins. Both sides will feel the effects of attrition on a national scale. Yet neither side is willing to shrink from the cost of the sacrifice.

July 1916 The new British army of Kitchener is finally ready. The French are in desperate need of assistance due to their losses at Verdun. With German attention focused on the French, the British feel their new army will be able to break through. They believe the intensive week long bombardment of the German trenches will have pulverized both the defenders and their defenses.  Carrying 80  pounds of equipment per man, the British climb over the top and slowly walk toward the other side of no-man's land. But the Germans rush out of their shell-proof bunkers to defend their line. A battle that will last for months is joined in the valley of the Somme.

April 1917 The new French General in Chief is Nivelle, the charismatic English speaking hero of Verdun. He convinces the British to join him for a two pronged attack. An attack against the base of the German salient that points at Paris. Plans that are anything but secret are made to put Nivelle's aptly named "Army of the Rupture" through the German lines in less than a day. Nivelle's problem is the Germans also see the potential of his plan. They withdraw from the salient and into the formidable defenses of the Hindenburg Line. Nivelle plows ahead regardless. The soldiers of the French army may be unhappy with the result.

March 1918 The Germans have knocked the Russians out of the war. Their forces are now rushed west. The German divisions are thoroughly trained in new assault tactics. This will be the Germans' best chance to win since their defeat at the Marne in 1914.  Time is short: fresh American troops and French and British tanks are starting to arrive in substantial numbers. The German stosstruppen are aimed at the weak point of the depleted British lines. The plan is to drive a wedge between the allied British and French armies. And General Ludendorff has follow up offensives ready to exploit any advantage gained. Can the Entente hold on until the Germans have depleted themselves enough that a counter offensive is feasable? Or will 1918 finally see the redemption of German frustrations since 1914? Or will the war drag on for years to come?