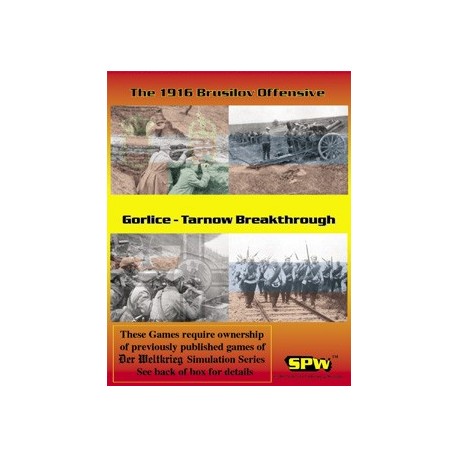 May 1915: To help the Austro-Hungarians, a new German army is formed under the capable von Mackensen, and placed in the line east of Crackow. He attacks and completely pierces the Russian lines. A Russian retreat ensues that enables the Central Powers forces to recapture most of Galicia. After being pressured by the Kaiser, von Falkenhayn gave into the insistence of Hindenburg and Ludendorff which resulted in a widening of the offensive.

The Central Powers offensive wound down as they struggled to supply troops hundreds of miles past the supply heads. The offensive has saved Austria-Hungary from immediate peril, but it does not knock Russia out of the war. And instead of enabling von Falkenhayn to focus on the west, most of the newly created German forces are fed into the increasing vastness of the eastern front.

June 1916: In response to French pleas for help to relieve the pressure at Verdun, the Russian STAVKA authorizes a major offensive. General Brusilov plans attacks all along the front of his Southwest Army Group aiming primarily at Austro-Hungarian positions.

The Austro-Hungarians are caught off-guard as their focus is a new offensive of their own in Italy. The Russian attacks achieves numerous breakthroughs and they advance tens of miles. The Brusilov Offensive did relieve the pressure on the French and came very close to knocking Austria-Hungary out of the war. Had Brusilov been supported by his peers to the north, and by the Russian Allies the war might well have been won by the Entente in 1916.

This is an add-on module and requires ownership of Tannenberg & Galicia and Serbia & Romania. The two games can be linked with the other East Front titles of the Der Weltkrieg series using the rules provided with this set to simulate the entire duration of World War I on the Eastern Front.