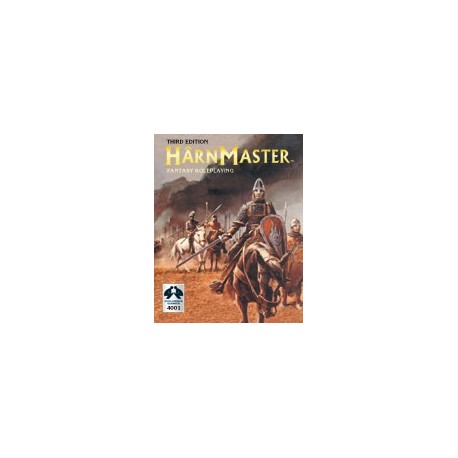 HârnMaster deluxe is the boxed set edition with 160 looseleaf pages, a pad of color character profiles, and a GM Screen.

The HârnMaster character generation system gives players a rich Hârnic experience. Characters may start the game with a wide variety of interesting occupations, and at various levels of experience.

Introductions to religious, Shek-Pvar, and Military occupations are included. Average incomes for all occupations and information about the guild system is included. Character contacts with (potentially) influential people are generated allowing players to explore relationships and advance their social standing.

HârnMaster uses a realistic interactive combat system that gives players many tactical options to control their combat destiny. The system is elegant, simple and easy to use.

The system is largely unchanged from the second edition and migration is easy. For example, the same character sheet is used. Also the Magic and Religion supplements are 100% compatible with 2nd and 3rd editions of HârnMaster.

HârnMaster 3 Mounted combat is now as an integral part of the combat system. SIZE rules are included to make combat with larger/smaller creatures more accurate.

BESTIARY
The bestiary includes articles about some unique Hârnic creatures (Ivashu, Gargun and Yelgri) as well as statistics for many other creatures.

HârnWorld is a realistic medieval environment for fantasy gaming. Using any rule system, you can create and plan your own quests and adventures within a complex and detailed fantasy background. HârnWorld is supported by an outstanding series of expansion modules. Quality, detail, and consistency are evident on every page. Welcome to Hârn...where the fantasy is real!

Hârn
A rugged, forested, hazy island off the northwest coast of Lythia. Tales of wild men, dwarves, elves, and fearsome beasts have been carried to the continent and these discourage all but the most adventurous of travellers. Included is a beautiful full-color map of the island, an overview, and a detailed index of the cultures, economics, geography, history, politics, and religions of Hârn.

Lythia
Lythia is Kethira's largest continent, an immense land of diverse cultures and peoples. Included is a full color map of the continent showing the major rivers, mountain ranges, regions, kingdoms, cities, and trade routes, etc. Also included is an annotated index describing all of the above, supported by several political, economic, and language maps.

Kethira
The name for Hârn's water planet which has three continents and two large polar ice caps. A full color map of the planet, plus maps of ocean currents, prevailing winds, and tectonic plates are included.