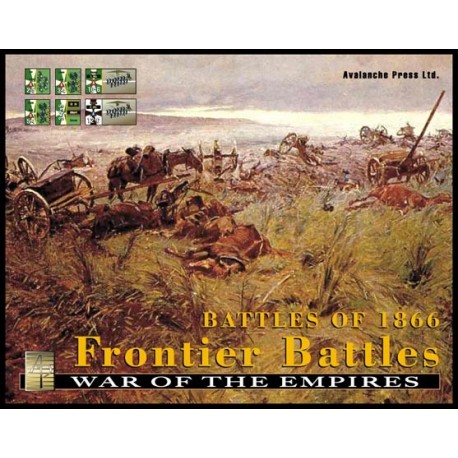 In the summer of 1866, Prussian armies invaded the Austrian Empire to carry out Chancellor Otto von Bismarck's policy of "Blood and Iron." The scattered corps of Austria's North Army met them as they exited the mountain passes, and in a series of hard-fought battles the Prussians drove the Austrians back using superior organization and the firepower of the "needle gun."

Battles of 1866: The Frontier Battles is the first of three games based on the clashes that completely changed the face of Europe. The game system is the same as that in our War of the States games, with a few modifications for the European way of war. Units represent infantry brigades, cavalry regiments and artillery batteries. The game pieces come in two sizes. “Long” pieces are 1 and 1/3 inches long and 2/3 inches wide, a very large piece. These represent infantry brigades. Other pieces are squares 2/3-inch across each side. These represent cavalry regiments and artillery batteries. Prussian, Austrian and Saxon units are all present. Units are rated for combat strength and morale, losing both as they take losses in combat.

Each battleground is recreated as a topographic map divided into irregular areas rather than the hexagons used in traditional board wargames. These are not chosen randomly, but rather conform to the lie of the land to channel movement the same way folds, rises and gullies do on an actual piece of ground.

A unit must fit in the area it occupies, in the direction it faces. If the area is too narrow for one of the large pieces, it’s not allowed to occupy the area, or at least not stay there and face the direction the player might like. Thus troops are placed along ridge lines, for example, not across them. Flanks become even more important; if you leave a unit “hanging” in a position where it can’t turn to defend itself fully against an approaching enemy because it can’t be placed in the area facing that direction, be prepared for serious losses.

Combat can take the form of assault, cavalry charge or bombardment. Each player rolls a number of dice equal to the total combat strength of his or her units involved. For each result of 6, one hit is achieved. For each hit suffered by a unit, it loses one “step,” or level of strength.

But before it can make an attack or move, a unit must be activated. Better leaders are better able to activate their units more easily, giving them a significant edge. Austrian leaders generally add more to combat, reflecting their army’s emphasis on personal courage, while the Prussians are better organized and will do a much better job bringing their forces to bear.

Austria has better cavalry and artillery, but Prussia brings the needle gun with its devastating short-range firepower. Prussian players will want to seize key terrain and force the Austrians to attack them.

The game includes fourteen scenarios covering five separate battles. At Trautenau on 27 June 1866, Ludwig von Gablenz's Austrian X Corps defeated Eduard von Bonin’s Prussian I Corps using outflanking tactics. But On the next day, the same methods failed when X Corps faced the Prussian Guard Corps at Soor. On the same day as the battle at Trautenau, Karl von Steinmetz’s Prussian V Corps won a bloody battle at Nachod against Wilhelm von Ramming's Austrian VI Corps, and the next day trounced Archduke Leopold’s Austrian VIII Corps at Skalitz. The set concludes with the Battle of Gitschin, where on 29 June 1866 the Prussian First Army defeated the combined forces of Crown Prince Albert of Saxony and the Austrian I Corps. 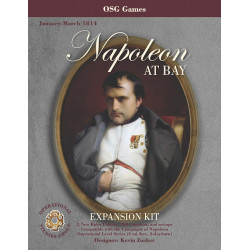 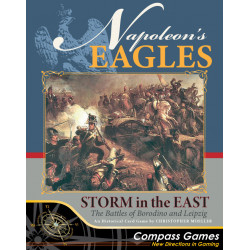 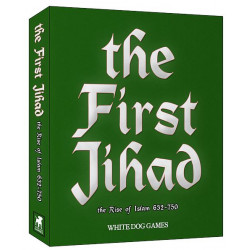