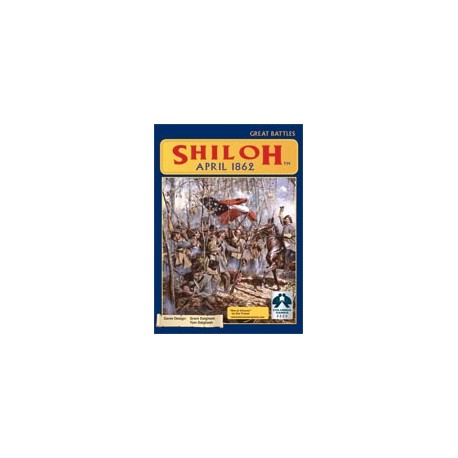 Shiloh was an important American Civil War battle fought in April 1862. A surprise Confederate attack, led by Albert Sydney Johnson, nearly swept encamped Union defenders into the Tennessee River. The next day, a reinforced Union army counter-attacked and drove the CSA line back in confusion and retreat. A CSA victory might have ruined the career of General Ulysses S. Grant. Instead, the battle ended with a Union victory, the death of Johnson, and the eventual demise of Confederate hopes in the West. Days 1 and 2 can be played separately or together.

Shiloh was initially developed from the Gettysburg: Badges of Courage game system. However, the game mechanics have been completely overhauled. The map is divided into large areas and combat is resolved within areas. The game plays using the fast-paced Move-Move-Battle sequence seen in Hammer of the Scots and Julius Caesar. There are no cards involved; players activate leaders to command brigades of the same division or corps. The game plays smoothly and quickly; each player gets to play one day on offense and one day on defense for a great gaming experience. Game time is 2-4 hours for both days of Shiloh.