Against the Odds 26 : There Must Be A Victory 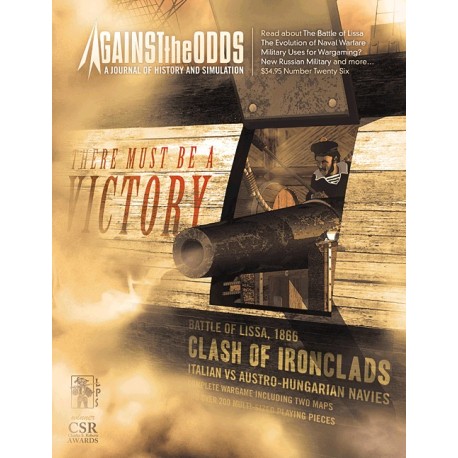 En savoir plus sur Against the Odds 26 : There Must Be A Victory

Sailing ships with broadsides - the last vestige of "wooden ships and iron men."

They mingle in a fleet action with iron-plated steamships, speedy armored rams, and a few ships with armored turrets.

No, it's the Adriatic, in a short and violent naval war between Italy and Austria-Hungary. Yes, you heard right. Finally, you'll have a chance to see the Austro-Hungarian navy in action. Historically, they did very well. How will you do?

The "Seven Weeks War" of 1866 is also known as the Third Italian Independence War. The Italians want Venice. The Austrians have it. But the Italians are allied with up-and-coming Prussia, and the Austrians have a hard time on land. On the Adriatic, the Austo-Hungarian fleet is outnumbered and outgunned, more to 2-1 in both categories. But they have aggressive commanders and a willingness to "Ram anything painted grey!" That was the signal from the Austro-Hungarian flagship (the Italians would be the folks with gray ships). The same signal included the sentence, "There must be a victory at Lissa."

And now it's up to you to find out if there will be, or if the Italians succeed in making the Adriatic "an Italian lake."

It is a classic confrontation, by designer Paul Rohrbaugh, of numbers versus quality, with over 200 multi-sized counters featuring individual ships and the admirals who commanded the fleets. Players maneuver on an operational map and then shift to smaller battle maps when it's time to put their iron to the test.

Two scenarios - just the conclusive Battle of Lissa or the entire campaign, along with important random events, intrusions by the French and Turks, optional rules for ships and events that could have happened, and more. Will you, as Italian Admiral Persano, see that the Austrian flag is "swept" from the Adriatic? Or will you, as Austrian Admiral Tegetthoff prove that your rams and unusual "flying wedge" formation can overcome superior firepower?

The choices are yours!

There Must Be A Victory and issue #26 of ATO