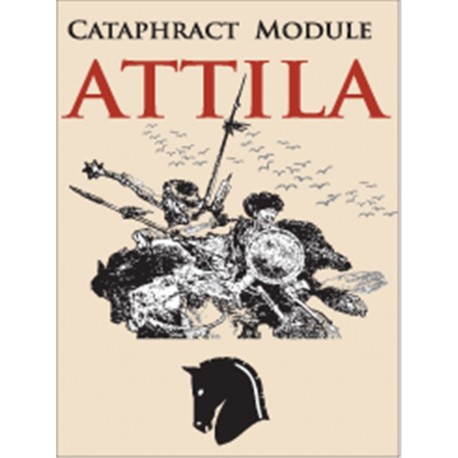 Note: To play Attila, you need a copy of Cataphract
The Utus
Attila vs Arnegisclus
The Huns vs Eastern Rome
Moesia II, 447 C.E.

The Catalaunian Fields
Attila vs Aetius and Theodoric
The Huns vs Western Rome and the Visigoths
Gaul, 451 C.E.

Attila features two of the few major battles thearmies of the Hunnic Confederation under King Attila fought against Rome: The Utus against Eastern Rome (The Utus) and the Catalaunian Fields against Western Rome. Gamers have the opportunity to pit the Huns both at their peak at the Utus, and then at somewhat reduced ability at the Catalaunian Fields against the rather different armies of Eastern and Western Rome.

The module includes 140 counters depicting the Huns and other barbarian notables, including the Visigoths, Alans, Burgundians, Franks, Saxons, and Gepids. For the Romans, the Cheiroballistra artillery makes its debut. Attila includes a full size map. Cataphract is required for play.

The Attila module introduces some changes to the Cataphract rules including the elimination of the Size rating and the reassessment of the missile fire effectiveness of the composite bow based on the latest research.In addition, Attila includes special rules to account for the unique style of steppe warfare practiced by the nomadic Huns - the feigned retreat along with rules covering defections and barbarian impetuosity.

Simple GBoH versions of both battles are included.