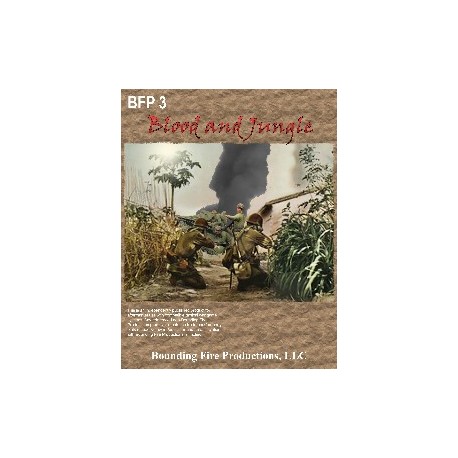 BFP 3: Blood and Jungle is a huge game package that will thrust players into the Pacific Theater of Operations, fighting through jungles, swamps, kunai and other treacherous terrain. For all of you who have been longing for some great, new PTO ASL action, Blood and Jungle was made for you! And if you've put off playing PTO, now is your chance to dive in headfirst and experience some of the best we've produced to date.

The size of this product is unprecedented by any other module, magazine, or scenario pack. This has been under development for over 8 years, and the scenarios - yes, all 47 of them - have been thoroughly playtested. There is a wide variety of actions from all over the PTO including the wood-covered hills and plains of China, the jungles and villages of Burma, Borneo and the Philippines, the bloody beaches of Tarawa.and many other locations throughout southeast Asia and the Pacific.

The Battlepack includes the following:

Ownership of the Bounding Fire Production© board BFP B is also required for scenario BFP-26.