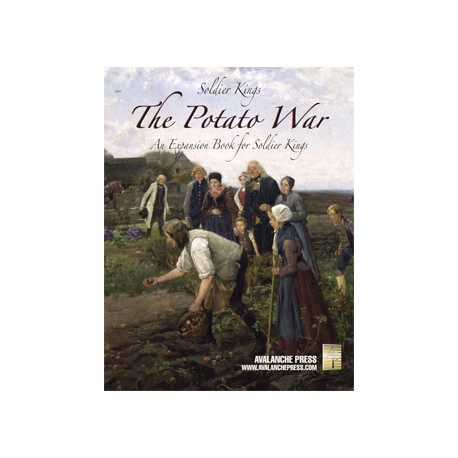 The Potato War is a supplement for Soldier Kings, the multi-player game of the Seven Years’ War.

Russian Empress Catherine the Great launched a war of aggression against the Ottoman Empire in 1768, starting a process that would completely transform the region known today as Ukraine from a wild grassland into the well-settled breadbasket of the Russian Empire and Soviet Union. The Russo-Ottoman War secured Russia’s great power status with reverberations felt down to the present day.

A decade later, the last war of the Enlightenment broke out in July 1778, following the death of the Elector of Bavaria. Austrian Emperor Joseph II sought Bavaria for himself; Prussian King Frederick II wished to block this acquisition. Their conflict became known as the War of the Bavarian Succession or, more colorfully, as the Potato War. Armies of both sides marched about Bohemia, scouring the landscape for food (potatoes in particular) while the diplomats hashed out a solution.

The Potato War brings these world-wide interlocking conflicts to Soldier Kings. In the Russo-Ottoman scenarios, Russia’s supposed allies France and Austria seek to prevent Catherine from seizing too great a share of southeastern Europe, while Prussia’s Frederick the Great schemes to profit from the confusion at the expense of Poland. In the Potat War, Britain struggles with a growing insurgency in her American colonies, France fans those flames and supports Austria, Prussia seeks to block the annexation of Bavaria and Russia supports Prussia. Happy Austria has once again married her way to more territory, but still has to take possession.

The book includes a full-color 17x11-inch map of the Black Sea Steppe and Caucasus regions. In addition to the new Russo-Ottoman and Potato War scenarios and their additional pieces, there are new pieces (with optional rules for their use) for the Seven Years’ War scenarios of Soldier Kings, plus some additional options. If you like Soldier Kings, you’ll love The Potato War: Never before has a wargame included a Potato Depletion Table.