> Wargames>XVII & XVIIIth Centuries>1714 : The Case of the Catalans 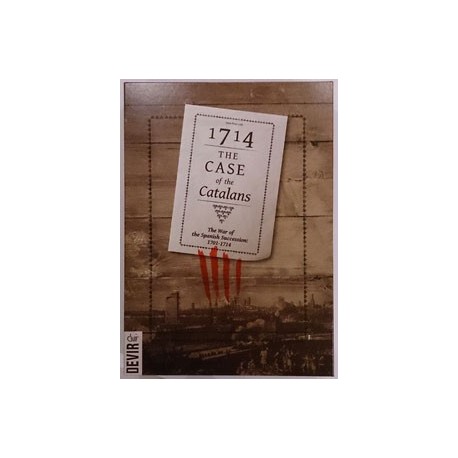 1714: The Case of the Catalans is a strategy and negotiation board game set in the War of the Spanish Succession at the beginning of the 18th Century.

More info about 1714 : The Case of the Catalans

The players represent the powers of the Grand Alliance constituted in 1701 to prevent the dynastic unification of France with the crowns of Castile and Aragon by the Bourbons after the death of Charles II.

Each player controls one of the following allied powers: Great Britain, the Dutch Republic, Austria, the Duchy of Savoy, and Portugal. Through the peace talks with the Bourbon powers during the war, the players should obtain the Concessions that match the secret goals of their countries. The troops under allied command can be moved to attack the Bourbon armies throughout Europe. The Allies must also manage the Resources of the power they represent and maintain sufficient Will to Fight to stay in the war. A very low Will to Fight indicates that peace talks with the enemy have taken place, limiting the player’s options and excluding him/her from the war.

The game includes 70 cards with the most significant events of the war, decisive historical figures and the treaties and battles of the conflict. The players need to make the most of the historical events to achieve the best negotiating position at the end-of-war treaty. The draw deck is divided in three periods: Early, Mid and Late-War. When the game moves forward to the next period, new cards are added to the deck and Concessions are dealt. The Concessions represent the peace negotiations between the Bourbon forces and the Allies. At the end of the game, the concessions will earn the player the Victory Points which, together with the occupation of specific spaces, will determine the winner.

The game is divided in rounds, and each one is subdivided in phases. In each round, as many cards as players are placed on the board. In turn sequence, the players must choose a card and place his/her turn marker on top. The round will progress following the cards from top to bottom and the player must choose if to play as per card’s text or as per card’s value.

The game ends either with the fall of the last rampart segment from the wall of Barcelona, which signals the end of the war and the Allies’ agreements on the Utrecht, Baden and Rastatt peace treaties, or when 20 Bourbon troops or less remain in the map, indicating a military defeat of Bourbon forces and the victory of the Grand Alliance before the Utrecht agreements are signed.

At the end of the game, the Concessions obtained by each player together with the spaces occupied by their troops will lead to a new allocation of territories surrendered by the Crown of Castile and France in the Treaty of Utrecht.