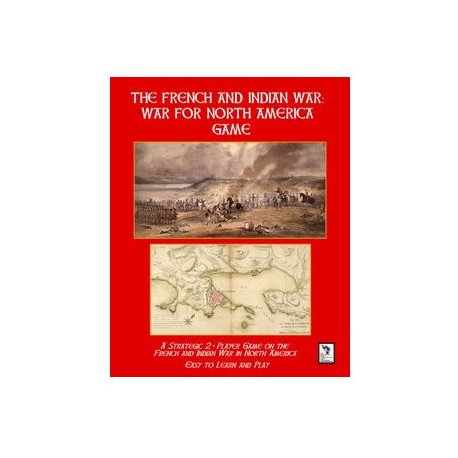 The French & Indian War is a strategic dice rolling game of conquest covering the French and Indian War in North America.

The game is a strategic dice rolling game of conquest covering the French and Indian War in North America with a British Player and a French Player. Two players can play a side if desired. Players attempt to conquer locations on the game map. Each location has a corresponding tile which has information on what dice need to be rolled to conquer the tile somewhat similar to Age of Wars. Event cards are played for each player each turn which provide benefits and detriments to the player. There is also a strategic phase where the player can muster some garrisons for key locations making them harder to take. Although there are automatic victory conditions for capture of specified locations, victory is generally achieved by conquering a certain number of locations.

While the sides are somewhat evenly matched, as the game progresses the British player generally gains in strength and the French player must make defensive attacks and play for position. A special naval die for each side allows for potential naval moves each turn.

The game contains a 11 x 17 strategic map, 32 Location Tiles, 20 event cards, 40 game counters and 17 icon dice. The game allows you to re-fight the struggle for North America between the British and the French.