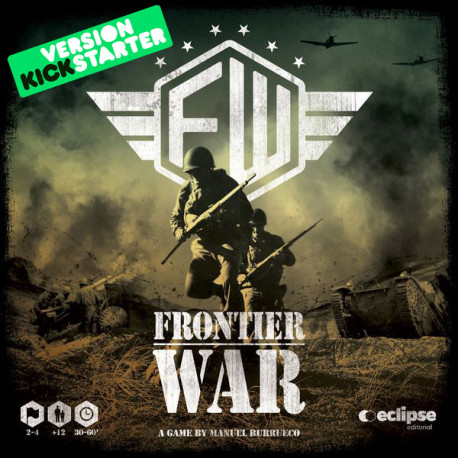 “Frontier Wars” puts you in charge of one of the WWII factions: United States, Great Britain, Germany or the USSR, represented by 100 miniatures (included in the box).

Offering an experience similar to computer real-time strategy RTS games, you must conquer new territories through battle, build new constructions that allow you to recruit new troops and build armies, and manage your cards (resources) to achieve victory.

Unless stated otherwise, any scenario you play (or design) has 3 ways to win the game:

There are three types of cards in “Frontier Wars”, which represent the resources and special actions of your faction. These cards will be used at different points of the game: attack, defense and tactics.

Aside from giving instant benefits when you play them, you may also keep them for research to win the Arms Race.

The board is modular, built with tiles, which allows for almost endless replayability. You may design your own maps or use the preset scenarios included with the game.