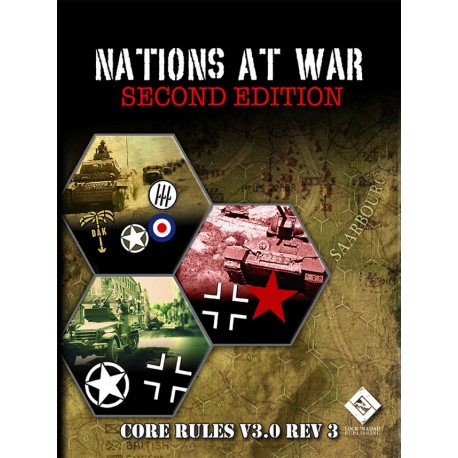 The Nations At War v3.0 (v3.0) rules manual contains the latest set of guidelines and regulations for the game system.

Our goal is to present the rules in a straightforward manner without disrupting their existing structure and foundation. For clarity, some rules sections have been modified not with content but with a new structure, e.g., additional subsections, more bullet points and rule summaries. Additional cross-referencing of rules expanded unit-image diagrams and a detailed Index and Glossary have also been added.

Other new additions to the v3.0 are our new NaW Starter Kit. Each rule section has a hexagonal color-coding system in the Table of Contents and throughout the manual, to make referencing certain sections and subsections easier. New rule section has been added: On Scenario Information, which breaks down how scenarios are laid out, to aid new gamers; and we have added a Video and Audio aids for the manual to help learn the system.

Notable changes from previous versions of the rules (v2.0 and earlier) will be presented in BLUE text. This new edition of the rules can be used with previously published modules.