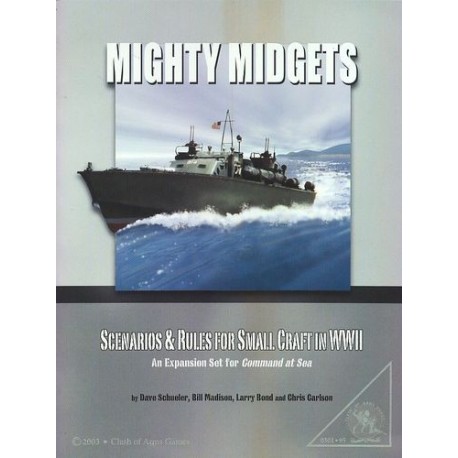 However, these Mighty Midgets performed invaluable services, venturing out night after night to attack enemy naval, air and ground forces. They operated in every major theater of the war, from the warm waters of the Pacific and the Mediterranean, to the frigid fjords of the Barents Sea. This module contains 31 historical scenarios featuring small craft (American PT, German S boats, etc.), including interdependent scenarios in a campaign setting. A special role-playing section has been included that allows players to take on the role of a squadron commander, creating battle plans that depend on the skill and morale levels of his crews for victory or defeat.
New data and modifications to the Command at Sea (CaS) game system (small craft damage, impulse movement, etc.) are introduced in this module. To scale down the CaS system to a level that covers damage by light weapons as small as .30 and .50 caliber machine guns took some tinkering, but the scenario design team of Dave Schueler and Bill Madison, along with the rules/data team of Chris Carlson and Larry Bond were up to the challenge. This module is a great addition to the CaS library and significantly expands the engagements that players can now re-create.

Note: This module is not a complete game in itself. You must have the standard rules to Command at Sea and the Rising Sun Data Annexes, second edition or later, to play all the scenarios.