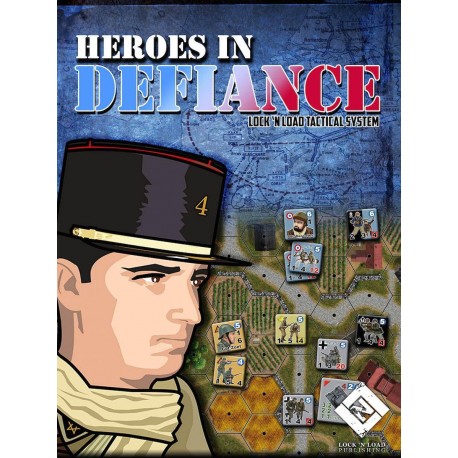 The Phoney War Turns Hot : Heroes in Defiance depicts the tactical fights of the 1940 campaign in France and Low Countries.

More info about Heroes in Defiance

In May of 1940, the Germans launched Fall Gelb (Case Yellow). Scores of German divisions flooded through the Ardennes and across the borders of France, Belgium, and Holland. The blitzkrieg tactics first used in Poland, in 1939, had been put into action again—and perfected. For over six weeks the Allies, including the British Expeditionary Force (BEF), put up a staunch defense. Despite their defiance, they could not withstand the fierce onslaught of the German Wehrmacht, the fearless Fallschirmjägers, and the notorious SS.

Heroes in Defiance depicts the full range of the battles for France and the Low Countries, from the first Fallschirmjäger airborne assaults in Holland to the closing of the pocket of the BEF and the remnants of the French Army at the Channel ports. Heroes in Defiance also adds five new scenarios (two previously unpublished) and eliminates the need for overlays with additional maps. It’s the blitzkrieg of 1940 at its best!

Requirements: No other product is required to play this game. This game contains some previously released material from Heroes of the Blitzkrieg and In Defeat, Defiance.