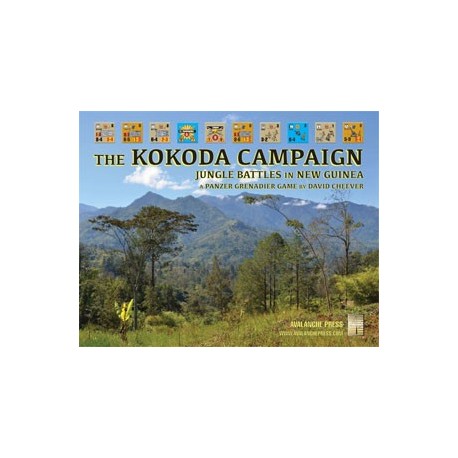 The Kokoda Campaign - jungle battles in New guinea - An introduction to Panzer grenadier is a complete boxed game.

Japanese troops landed in northeastern New Guinea in July 1942, and quickly began a march over the forbidding Owen Stanley Mountains toward the vital anchorage and airfield at Port Moresby on the southern coast. They ran into Australian infantrymen of the 39th Militia Battalion, starting a three-month campaign waged in some of the world's most forbidding terrain.

An Australian militia brigade went up the trail to face the Japanese, who poured in reinforcements of their own. Next the veteran Australian 7th Infantry Division, the heroes of Tobruk, plunged into the jungles and finally stopped the Japanese attacks. While Australian soldiers fought on despite rampant malaria, Japanese troops hauled artillery shells over the mountains by hand and resorted to eating Australian prisoners of war. Finally in September 1942 the Japanese withdrew from one of the war's most brutal campaigns.

Based on these battles, it includes the two maps that appeared in our old Kokoda Trail book and 428 playing pieces that originally appeared in our out-of-print Guadalcanal and Afrika Korps games. It has 30 scenarios originally designed by Dave Cheever and re-worked by Matt Ward and Daniel Rouleau, plus a campaign game.