Blocks in the East 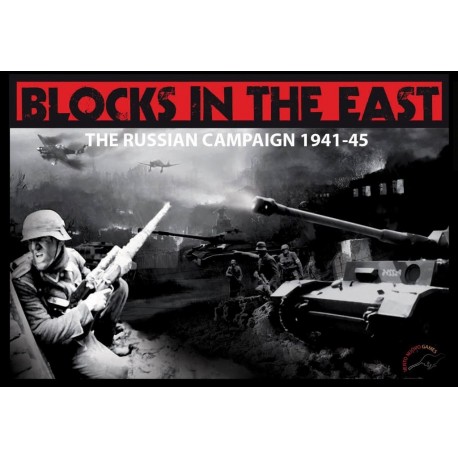 BLOCKS IN THE EAST is a new concept game covering the whole Eastern Front campaign from 1941 to 1945.

Developed on wooden blocks and cubes system, over an astonishing 125x87cm (49x34inches) full laminated multicolor map-board, there's not any paper component, but the Manual.

More info about Blocks in the East

All the over 600 wooden/plastic components have been created by the best Italian artisinal industry and painted "A baratto", a technique usually adopted for painting car parts and accessories.

HISTORICAL BACKGROUND
On 22 June 1941, under the codeword Dortmund, the German Wehrmacht started the invasion of the Soviet Union.

BLOCKS IN THE EAST recalls, in game form, the most decisive battles fought in the Eastern Front from the beginning of the invasion in Summer 1941, until the dramatic end in Berlin in Spring 1945.

BLOCKS IN THE EAST is a game for two/four players, one/two control the Soviet Red Army and the other one/two control the Axis Powers.
Although based on history, players in command of the two factions can modify the evolution of World War 2 on the Eastern Front.

RULES INTRODUCTION
The rules are divided into three major sections which can be learned one at a time.
The first section is the BASIC GAME RULES which introduces the basic concepts and enables players to start playing the game without too many rules to remember.
Then the ADVANCED GAME RULES provide more specific and detailed rules for an enhanced realism, such as the use of Fuel and the Advanced Production System.
Finally, for those players who want to get the best out of the game, OPTIONAL RULES can be added as desired.
The Optional Rules include Technology Research, Strategic warfare over German factories and U-Boot Campaign in the Atlantic Ocean, Amphibious Invasions, Parachute Assaults…

SCALE: A hexagon is approximately 53 miles (70 Km) across.
A turn is 1 month long.
A full strength counter represents 300 planes, 300 Tanks, or 30,000 men, depending on the type unit, equipment and nationality.

FOG OF WAR: The game can be played with the Fog of War on (wooden blocks are placed on the map in such a way the opponent player can not see them) OR with Fog of War OFF (all units are visible).

Scale
A hexagon is approximately 53 miles (70 Km) across.
A turn is 1 month long.
A full strength counter represents 300 planes, 300 Tanks, or 30,000 men, depending on the unit type, equipment, nationality, etc.

SCENARIOS
With over 300 units counters and 300 different resource points of various color, players can enjoy hours of fun by playing the full 1941 Codeword Dortmund Campaign, or one of the 4 others 6-turns scenarios:

Every scenario has different Victory conditions and length, with a playing time from 1 to 49 turns.