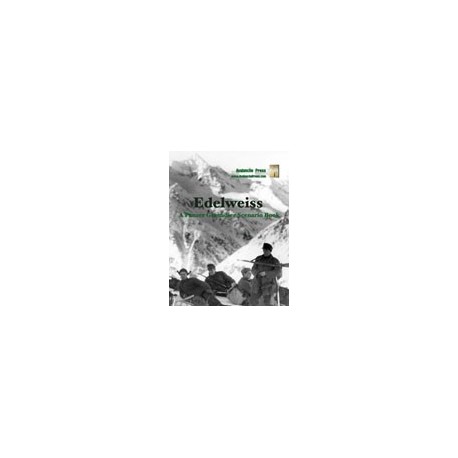 Edelweiss is a 64-page book supplement for the Panzer Grenadier series, based on the battles fought by German regular army and Waffen SS mountain troops.

German mountain troops fought on every front except North Africa, compiling an impressive war record (and a few war crimes as well). These elite “mountaineers of the plains” saw action in all sorts of terrain and in all weather.

Edelweiss is not a complete game: playing pieces and maps are drawn from the following Panzer Grenadier games and supplements: Road to Berlin, Battle of the Bulge, Sinister Forces, Eastern Front, Afrika Korps and Desert Rats. There are 41 (forty-one!) scenarios, each based on an actual battle or situation, plus historical background on the German mountain divisions and their exploits..

Edelweiss includes 161 laser-cut and mounted playing pieces: 157 of them the standard 2/3-inch square pieces of the Panzer Grenadier series, and four of them double-sized monsters. Two are Soviet river monitors, and there are two versions of the giant motorized mortar "Karl."