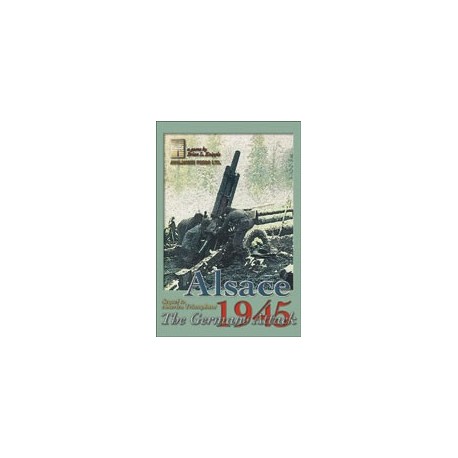 Alsace 1945 covers the American offensives of November and December 1944 and the desperate German counterattack in January.

Like any dying organism, the Nazi regime lashed out against its enemies during late 1944 and early 1945. The most famous of these actions, the so-called “Battle of the Bulge,” is the focus of our America Triumphant game. Less well known but equally critical in destroying Germany’s military potential was the offensive in Alsace, Operation North Wind, which opened a few weeks later.

Along the southern portion of border between France and Germany lay the plain of Alsace and the city of Strasbourg. The province of Alsace and its political capital, Strasbourg, had been annexed by the Germans in 1871, returned in 1918 and retaken by the Germans in 1940. The city in many ways represented the prestige of France and its capture would exercise an immense influence over Allied operations in the battles that raged across the plain in the closing months of the Second World War.

Alsace 1945 covers the American offensives of November and December 1944 and the desperate German counterattack in January. The game system, used previously in America Triumphant, covers these three battles in scenarios requiring only a few hours to play. A fourth covers a hypothetical German attack launched in conjunction with the Ardennes (“Battle of the Bulge”) offensive to the north and capable of being played alone or with with America Triumphant.

With 140 game pieces and one 22x17-inch map, the game covers the battles at the regimental and battalion level and includes the effects of outside political and military events, the biggest being the Ardennes offensive.

The following scenarios are included:

• The Alsace Offensive. As the Allied armies closed up everywhere on the German border in November 1944, it seemed that the war was nearing the end. It was no different in the American Seventh Army sector where the XVth Corps attemped to drive the Germans back north of Strasbourg.

• Drive to the Westwall. The American November offensive ground to a halt with few gains for the losses suffered. After reorganizing, the Americans resumed their drive toward the Westwall on the 5th of December. German forces had been stretched thin as the High Command ordered mobile formations transferred out of the area to prepare for the upcoming offensive in the Ardennes. Those remaining had been bled white by the American attacks. With the new 12th Armored Division on loan to Patton’s Third Army, where it replaced the worn out 4th Armored Division, the two American corps attacked north in the morning hours.

• Operation NORDWIND. The Ardennes offensive stretched the American Seventh Army’s front as units spread out to hold territory previously held by units of the Third Army sent north to attack the southern flank of the German penetration of the Allied lines. With the German advance stalled, Hitler looked for an opportunity to strike a blow against the Allies and came up with the Alsace region of France where the Germans believed the Americans were especially weak.

• Wacht am Rhein South. The only real chance the Germans had of seriously disrupting the Allies on the Western Front was to attack in the Ardennes and Alsace as close together as possible. This scenario presumes that the German High Command was able to bring together the necessary units and supplies without the Allies suspecting an attack was in the works. Even assuming complete ineptitude on the part of the Allied intelligence community, the Germans would have had a difficult time assembling the forces required to mount a credible attack in Alsace. Unlike the American defenders to the north, the Seventh Army was actively advancing, even if only with a portion of its strength. While not realistic, it is interesting to examine the possibility of a theater-wide offensive. This situation can be played alone or in conjunction with America Triumphant.