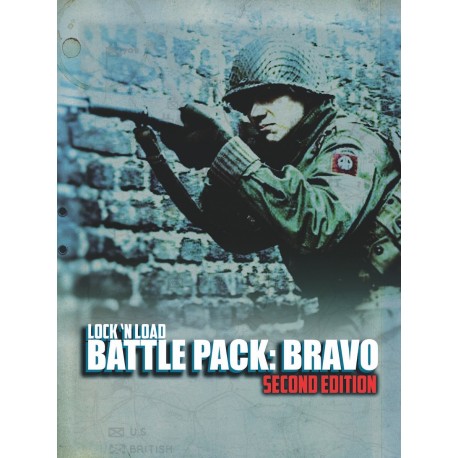 Lock ‘n Load Tactical: Battle Pack Bravo Second Edition contains 12 new scenarios for use with the components found in Band of Heroes and Noville, Bastogne’s Outpost. From Normandy to the Hürtgen Forest, to Monte Cassino and Anzio in Italy, Battle Pack Bravo has you covered. It also includes a return to Noville, Belgium, as the Battle of the Bulge wanes down.

Scenarios take place from Normandy to the Hürtgen Forest, at Monte Cassino and Anzio. Take part in daring prisoner rescues, slash through Normandy's Bocage with Culin-mounted Shermans, fight for Cauquigny and the La Fiere Bridge on D-Day, take on a retreating group of SS—including a Tiger—in Noville, and fight for the towns of Strass and Gey, Germany, on the edge of the Hürtgen Forest.

The scenarios are laid out in a full-color booklet, and were designed by savvy LnL specialists Dale Holmstrom, Yvan Descotes, Stéphane Tanguay, Jeff Lewis and Mark Walker.

The Castle map is printed on heavy cardstock and comes not only in its standard size (8.25” x 12.75”) but also as a free bonus X-Map, a new oversized 11” x 17” map that retains the LnL game scale but increases the size of the map and its hexes, providing a larger playing area and more space for your units and administrative markers.