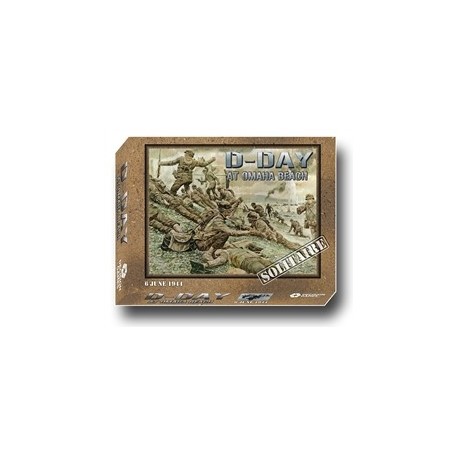 D-Day at Omaha Beach(Re-print) recreates America’s most bloody and heroic day of World War II.  In this solitaire game from the designer of the solo classics RAF and Ambush, you control the forces of the US  1st and 29th Divisions landing under fire on the Normandy shore, and struggling desperately to establish a viable beachhead.

US units include assault infantry, amphibious tanks, artillery, engineers and HQs. The game system controls the hidden German defenders in Widerstandsnest resistance points on the bluffs overlooking the beaches. US forces that manage to break through the deadly coastal defenses and reach the high ground must then contend with German mobile reinforcements in the bewildering hedgerows of Normandy’s bocage.  An innovative diceless combat system highlights unknown enemy deployments and the importance of utilizing the right weapons and tactics.
Event cards keep the action flowing and the rules simple, while controlling German strategy and introducing extensive historical detail. The game includes amphibious landings, German artillery and rocket barrages, US naval bombardment, tides, engineer operations, and intangibles such as US leadership under fire and the initiative of the American GIs.
Scenarios: The First Waves (two to three hour playtime) introduces the basics of the game in a recreation of the initial assault.  Beyond the Beach (four to five hours) picks up on the high ground at 10:00 a.m. and adds rules for German tactics.  D-Day at Omaha Beach (seven hours) covers the entire day, from 6:15 a.m. to 6:00 p.m. Optional rules explore what-ifs, such as more pre-invasion bombardment or the arrival of German armor.
Game Scale
Time: each turn equals 15 minutes in the basic game, 30 in the extended game.
Units: companies for both sides.
Map: each hex equals 275 yards (250 meters).
Contents:
Trustpilot