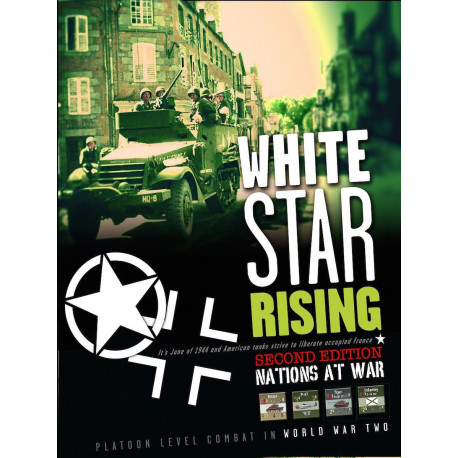 It's the summer of 1944, and Allied forces fight to liberate occupied France from Germany. It's a titanic struggle that pits the advanced weaponry of the German Army against the airpower, artillery and ever-improving soldiers of the Allies. Welcome to Nations at War series.

In White Star Rising you'll find everything you're looking for in a platoon level game: armor, artillery, infantry serving as more than cannon fodder, command and control, air support, and desperate close assaults that leave the victor in possession of the ground and the defeated in headlong retreat. All included in an easy to learn and challenging to master game system. White Star Rising 2nd Edition w/Upgrade Kit, which focuses on the fighting between the Americans, their British allies, and Germans, Unit types include vehicles, soldiers and weapons of the armies that fought in France, Belgium and Germany in 1944-45. You'll fight battles at Omaha Beach, in the Lorraine, on the outskirts of Belgium, and in Germany itself.


We now include a new Battle Generator adding hours of play to your game.


Requirements: This is a complete game and nothing else is required to play.