> Wargames>World War I and Russian Civil War>Dawn of the Rising Sun: The Russo-Japanese War 1904-05 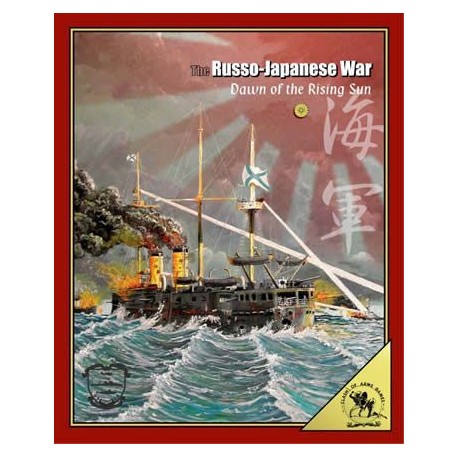 Dawn of the Rising Sun contains 20 scenarios covering all the major surface engagements of the Russo-Japanese War that led to this stunning reversal of fortunes. Using the same rules as Fear God and Dread Nought, a novice can begin playing within a half hour of opening the box using the specially designed Jump start scenario.

More info about Dawn of the Rising Sun: The Russo-Japanese War 1904-05

Dawn of the Rising Sun follows the same format as Clash of Arm's other rules used in the Admiralty Trilogy, making them easy to follow for experienced gamers, and novices alike.

Tactical turns represent 3 minutes, with intermediate turns (for long distance maneuvering and long stern chases) representing 30 minutes. Gun hit probability is based upon a combination of factors such as visibility, range, target size, number of rounds fired at the target, and the speed of the firing and target platforms.

Damage is a function of the type of shell, number of barrels firing and armor of target, and is easy to calculate also. Blank ship forms allow the player to list all the ranges and damages of his ship's particular guns in advance, making it quick and easy to calculate both damage and hit probability. Critical hits are a function of the amount of damage taken last round vs. the amount of damage able to be taken. Critical hits are typically scored against systems (engineering, bridge, steering or individual weapon mounts).

Each scenario has its own map, showing the disposition of forces. In addition to the well known battles such as Port Arthur, Yellow Sea, and Tsushima Strait, several smaller battles are included. The scenario book is full of original after action reports as well as helpful sidebars on a wide range of topics. The Data Annex is complete for all the ships that were involved, as well as including line drawings of the major combatants and additional source material, making it a valuable reference in itself.

Step onto the Admiral's bridge and see if you will sustain or reverse history.