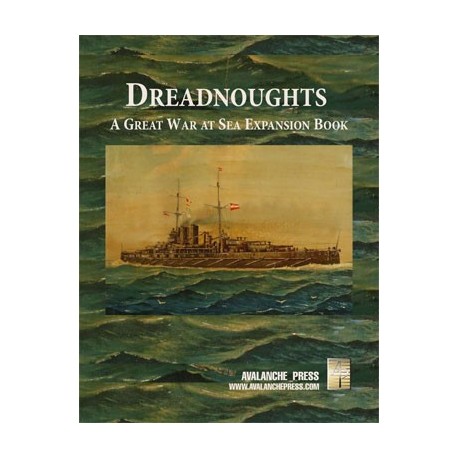 Dreadnoughts is a book supplement for the Great War at Sea series.

In 1906, a new kind of battleship slid into the water at Portsmouth Naval Dockyard. Much larger than previous types, HMS Dreadnought carried more and bigger guns. For a generation, ships like her ruled the world's seas.

Articles, scenarios and counters are provided for the Spanish Armada of the World War One era (including its projected but never built second- and third-generation dreadnoughts), the Ottoman Turkish navy, Austro-Hungarian building projects and the saga of South America's dreadnought programs and the many attempts by other nations to purchase these ships.

There are also new "advanced" tactical rules by Karl Laskas, giving players the option to take a more detailed approach to combat.

New counters include the Brazilian battleship Rio de Janeiro, already appearing under three different flags in the series, under the colors of her other suitors. The Russians get their full set of Nakhimov class cruisers, the Amurski-class cruisers seized by the Germans, and the Prut, a captured Turkish cruiser.

Austria-Hungary receives the 1916 type battleship (armed with 16.1-inch guns), the ancient coast defense ship Erzherzog Rudolf, the remainder of the 1914 cruiser class, plus a counter for her projected aircraft carrier. In Turkish colors are the various British and German battleships and cruisers that almost joined the Ottoman service, including the armored cruiser Blücher (a "sure thing" that fell through in 1910). There are even counters for the Austro-Hungarian PKZ-2 armored helicopter!

And for all these ships, new scenarios! Over two dozen of them, studying just what these navies planned to do with their increased strength.

For true fans of the series, this supplement will quickly become a must-have. At just $29.99, it's not to be missed.