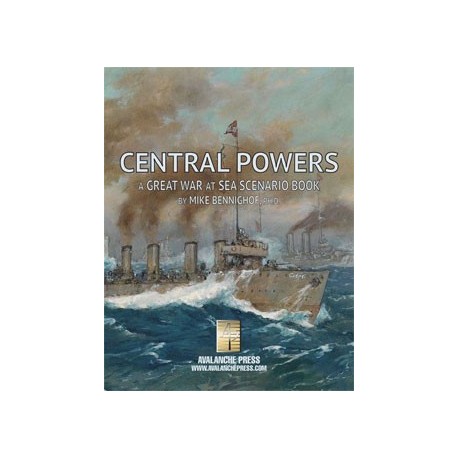 Central Powers is a book supplement for the Great War at Sea series.

In Great War at Sea: Triple Alliance, we explored the notion of Italy remaining true to her alliance partners, Germany and Austria-Hungary, during the outbreak of the First World War in 1914. Staff officers from all three fleets prepared detailed operational plans, yet when war came in August 1914 Italy refused to join her Alliance partners and those plans would never be used.

The joint staffs foresaw an aggressive Triple Alliance, one attempting to seize control of the Mediterranean from the British and French. Our book Triple Alliance looked at the first year of such a naval war in a set of 43 new scenarios for our Great War at Sea: Mediterranean boxed game.

Central Powers picks up that story in September 1915, with Italy, Austria-Hungary and Germany still struggling against Britain and France as new warships join the fleets of both sides. The fleets are almost evenly matched, with a slight Allied superiority in numbers matched by the Central Powers' central position. In this war, the fighting on the Mediterranean Sea has been just as bloody and destructive as that on the land fronts.

Central Powers is a book supplement for the Great War at Sea series based on this naval war that never happened, but was probably more likely to have occurred than the actual events. It is not a complete game; ownership of our Mediterranean and Jutland boxed games and Triple Alliance, Dreadnoughts and Zeppelins supplements is required to enjoy all of the scenarios.
The book includes 90 new playing pieces. The French receive their powerful Normandie- and Lyons-class super-dreadnoughts, and a pair of battle cruisers as well. And there's a quartet of French light cruisers proposed before the war but never built, that would have been very useful in fleet actions.
With the Royal Navy unwilling to detach too much strength from the Grand Fleet facing the Germans across the North Sea, it falls on the other Allies to bolster this very active naval front. The Americans enter the Mediterranean naval war with their oldest dreadnoughts and newest pre-dreadnoughts, plus a large squadron of the armored cruisers. The Japanese are present as well with a squadron of battleships and one of cruisers. Plus there are four re-armed Austrian light cruisers (there have to be Austrians) and an Italian seaplane carrier (with seaplanes).

The 42 scenarios continue the Triple Alliance story line through to the end of the Great War. It's a unique project, telling the alternative history of the entire Triple Alliance Mediterranean naval war in a series of game scenarios.