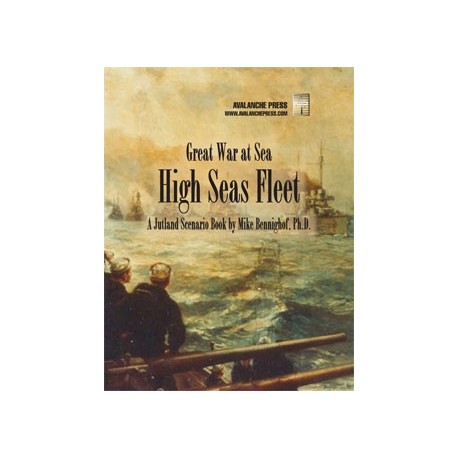 A scenario book with new counters for GWAS Jutland.

During the brief period between 1906 and 1914, so the story goes, Britain and Germany engaged in a furious naval arms race sparked by the launch of the Royal Navy’s revolutionary battleship Dreadnought. This rivalry, egged on in Germany by Grand Admiral Alfred von Tirpitz, then helped ignite the First World War.

As usual, reality is a little more complicated than popular history. Tirpitz’s enemy lay not across the North Sea but rather in the War Ministry offices just on the other side of the Brandenburger Tor. Army and Navy battled furiously for funding, inventing, respectively, the (possibly mythical) Schlieffen Plan and the Risk Theory (less mythical, but just as detached from reality) to justify ever-higher levels of spending. In the event, neither got what they wanted: the Navy did not build a new class of dreadnoughts every fiscal year, nor did the Army get to muster two dozen new divisions to “reinforce the right.”

But what if Tirpitz had won his real battle? Germany had the financial and industrial resources to build a fleet to challenge the British. What might this fleet have looked like, and how would it have stood up to the Grand Fleet in battle?

High Seas Fleet is a supplement for the Great War at Sea series that studies this question with background essays, thirty new scenarios, and 70 new scorchless, sootless laser-cut playing pieces. It is not playable by itself; you’ll need the Jutland game (and only the Jutland game) to play the scenarios. You can, of course, just read the essays and fondle the pieces without owning Jutland. We won’t tell.

This is a powerful fleet that can stand toe-to-toe with the British Grand Fleet – the fleet the propagandists boasted of but Tirpitz feared to actually build. Now you can lead it into battle.