Fall of Empires - The Eastern Front 1914 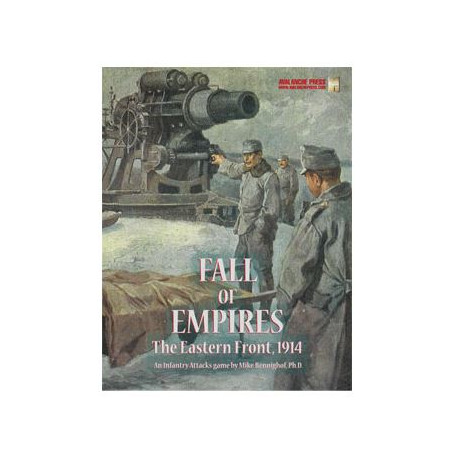 Fall of Empires - The Eastern Front 1914 is a stand alone game from the Infantry Attacks series.

More info about Fall of Empires - The Eastern Front 1914

In the late summer of 1914, the German General Staff informed their Austro-Hungarian allies that they would stand on the defensive against their common Russian enemy. Undeterred by this reality, the Austrians pushed forward with their plans to attack. After initial successes, the outnumbered Austro-Hungarian forces fell back with severe losses.

Fall of Empires is a stand-alone game in the Infantry Attacks series, the World War One equivalent to the long-running Panzer Grenadier series. Units are companies and squadrons, and the forty scenarios represent actions from the opening battles of 1914 in on the Eastern Front between the Russian and Austro-Hungarian armies.

You get 517 die-cut and silky-smooth playing pieces and six semi-rigid mapboards, the same type found in Panzer Grenadier games. They're fully compatible with the Panzer Grenadier boards — you can play scenarios from either series on mapboards from the other game system.