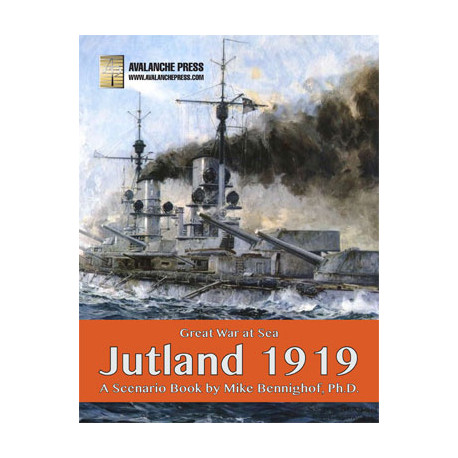 A scenario book with new counters for GWAS Jutland.

Jutland 1919 is a supplement for Great War at Sea: Jutland, studying these drawing-board battleships that would never actually be launched. It includes background essays, thirty-one new scenarios, and 80 new silky-smooth die-cut playing pieces (60 double-sized "long" ship pieces and 20 square ones). It is not playable by itself; you’ll need the Jutland game and High Seas Fleet book to play the scenarios. You can, of course, just read the essays and fondle the pieces without owning either.
New pieces include three classes of German battleships designed but never built: a fast battleship with eight 15-inch guns, a battleship with ten 15-inch guns in five turrets, with three of them in a unique triple-stacked arrangement. And an even larger ship with 16.5-inch guns. There are two new classes of battle cruiser, one with 15-inch guns, one with 16.5-inch guns. And two variations on the fast armored cruiser proposed after the Battle of Jutland, one with ten 8.2-inch guns, and one with twenty (20) 5.9-inch guns. Plus there are additional scout cruisers and destroyers.
The British for their part receive their improved but slower Queen Elizabeth class, with ten 15-inch guns, and the massive ships proposed to carry eight 18-inch guns apiece, based on the Hood design but slower with battleship-scale protection. Plus their own fast armored cruiser.