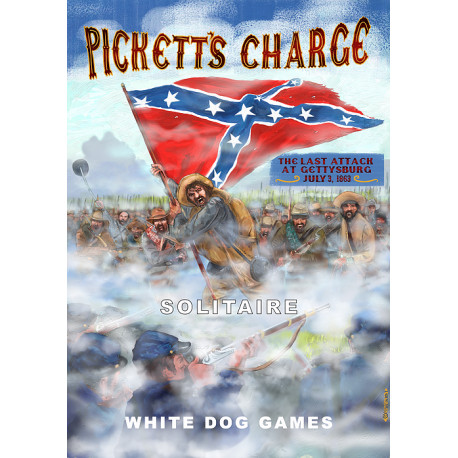 Pickett's Charge is a Solitaire Game where you command the confederates charge against the Union center at the Battle of Gettysburg.

Easily the most famous engagement of the Civil War, Pickett’s Charge was the high-water mark of the Confederacy. A frontal attack across open ground by 12,000 - 15,000 men against the center of the Union line in the teeth of withering artillery and infantry fire, Pickett’s Charge was the defining moment of the battle of Gettysburg and, although militarily futile, represents to many the courage and glory of the Confederate soldier.

Pickett’s Charge: The Last Attack at Gettysburg JUly 3, 1863 is a beer-and-pretzel, solitaire simulation at the brigade level of the historical events of July 3, 1863.  The Player commands the Confederate side while the Union side follows solitaire rules. Besides the historical scenario, there are four other scenarios: Effective Confederate Bombardment, Culp's Hill Coordinated Attack, Additional Infantry Support, and J.E.B. Stuart's Cavalry. Play time: one hour once rules are learned.