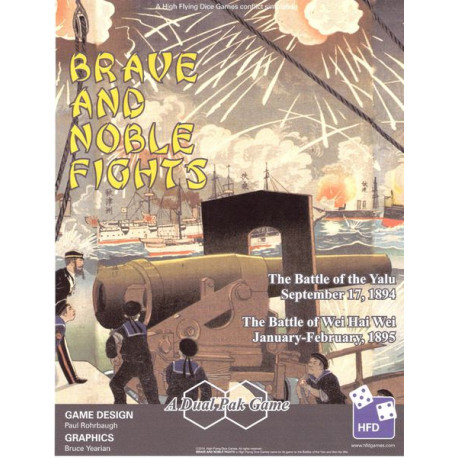 Brave and Noble Fights : The Battles of the Yalu and Wei-Hai-Wei, 1894-1895 is a dual-pak game containing two games in one!

Battle of the Yalu: The Japanese invaded Korea, seeking to make the nation a protectorate. Imperial China had an army in Pyongyang and resisted the Japanese but, after a sharp and violent battle, the Chinese General ordered a retreat over the Yalu River and out of Korea. The Chinese quickly dispatched reinforcements via a convoy of troop ships escorted by the very powerful Peiyang Fleet, led by Admiral Ting Ju Chang. The bulk of the Japanese fleet, under the leadership of Admiral Ito Sukeyuki, intercepted the Chinese fleet on its return to Port Arthur, and the largest battle at sea up to that time between steam powered steel warships ensued.

Battle of Wei Hai Wei: The battle was the final large-scale fight waged in the Sino-Japanese War of 1894-95. The surviving ships of the Chinese Peiyang Fleet, following their defeat at the Battle of the Yalu, sought shelter in the heavily fortified port of Wei-Hai-Wei. The Japanese fleet quickly blockaded the port and in January 1895, the Japanese 2nd and most of the 6th Infantry Divisions were landed to assault the Chinese positions.