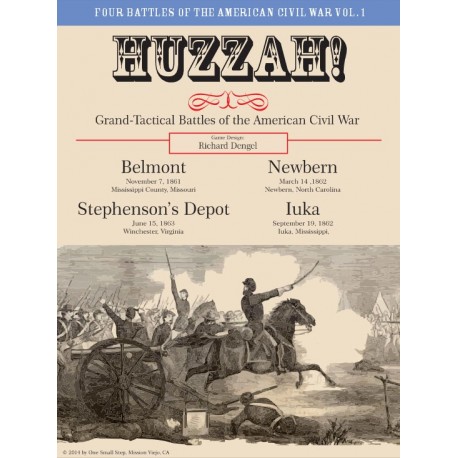 Designer Richard Dengel (Rebel Yell!) has returned with a new entry into the American Civil War pantheon of games with his new Huzzah! grand-tactical system. In partnership with One Small Step, we are bringing the first entry in the system to your gaming table this summer.

Vol. 1 contains four battles from the ACW: Belmont, Iuka, Newbern and Stephenson's Depot. Each of these is profiled below.

Huzzah! simulates American Civil War combat at the tactical level. The system features encounters little known yet strategically fraught. These are fights that, had they concluded differently, might well have transformed a campaign, a reputation, or both. So, while the battles in were little more than a scrimmage when compared to, say, Gettysburg or Stones River, they were not insignificant, bearing weight well beyond what mere numbers suggest. This game is the first installment of what will become a series of games using the system. The next installment in the series will be a second quadri-game focusing entirely on the Wilderness Campaign. These four battles will also be combinable into a large campaign game.

Combat units are Infantry, Cavalry, and Artillery. Each Infantry and Cavalry unit represents 3 or more companies of a given regiment. Each Artillery unit represents an Artillery Section of 1 or two guns. Leader units represent individual commanders. Each hex equals about 150-200 yards.

The Sequence of Play is highly interactive, consisting of the following steps:

Stephenson's Depot was a prelude to the battle of Gettysburg. Richard Ewell enjoyed his finest day of the campaign when he smashed the isolated outpost of Robert Milroy at Winchester.

Rosey and the Woodpecker, the battle of Iuka, was a meeting engagement of sorts; few units begin on map and both sides receive a steady stream of reinforcements. Grant, the Yankee commander had divided his army into wings, each to simultaneously converge upon the rebels at the small railhead of Iuka.

Old Burn at Newbern, the battle of Newbern, North Carolina. A promising young star of the Union, Ambrose Burnside (Old Burn to his equals) runs up against a scratch force of Confederate militia, artillery, and cavalry.

Smash 'Em Up! the battle of Belmont Missouri, was U.S. Grant's first significant encounter with the Confederate Army.

A Brief Interview with Richard Dengel

How long have you been working on Huzzah?

rad: I don't specifically recall when I first started Huzzah! Probably around 2004 after some initial success with DTP I Fights Mits Sigel (a Rebel Yell game). I first offered Huzzah as a DTP around 2006, So it took me about two years of testing and refining before I offered it publicly. Since then, I've continued tweaking the system. There have been few radical changes, mostly clarifications and quiet adjustments. The biggest change came about because of Bill Byrne's AAR, and then but to clarify artillery capabilities. The re-formatted Rebel Yell system provided a sound foundation on which to build. So overall the work has been 10 years in the making with countless playings along the way. No that much in the way of rule changes, though.

What sort of research regimen do you use?

rad: First I look to general tactical overviews. Paddy Griffith's Battle Tactics of the Civil War and his shorter Battle in the Civil War are my bibles, followed closely by Jack Coggins Arms and Equipment of the Civil War. The Bloody Crucible of Courage by Brent Nosworthy and McWhinney & Jamieson's Attack and Die also provide some spice. After these I take one or two reputable narratives specific to a battle and build on them. For example, Old Burn at Newbern extrapolates largely on an article I found in Blue and Gray magazine. For Iuka I used Peter Cozzens' account in The Darkest Days of the War. I won't recite the entire bibliography, but you get the idea. Essentially I take generic principles and apply them to the specific instances of a battle. Of course, I adjust as necessary to account for unit morale, leadership, and weaponry (at least as I interpret them). For added flavor I research period battle flags and leader images to decorate the pieces.

What was your design purpose (aside from lighter version of RY)?

rad: Rebel Yell, once learned, is a challenging and unpredictable game. It is subject to wild fluctuations of fortune. I've seen games where my opponent is on the brink of collapse only to rebound with a ferocious counter attack in his turn. One should never concede based on an opponents second Action segment. Remember, you'll reply with two of your own and that can spell the difference between a loss and a slogging on.

Unfortunately, because of its length and complexity, I always wondered how accessible Rebel Yell was. Its easy to be put off by the length of the rules. My purpose in Huzzah is to present a gateway game that presents the principles of the parent in a more digestible, manageable format. Huzzah is a relatively quick moving game that contains all of the stress and problem-solving contained in the original. I wanted a "simple" game, fraught with challenge, and true to the principles of ACW tactical combat. In Huzzah you must exhaust and depress your opponent. It not likely you'll achieve a numerical victory but it is certainly possible to wring a mental one. That, I think, is the epitome of ACW combat.