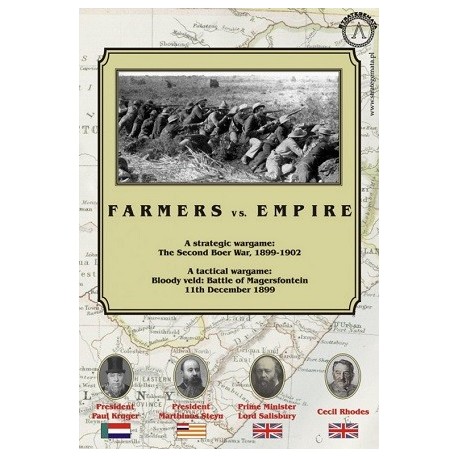 More info about Farmers vs. Empire

Game description
The game presents the struggles that took place during the Second Boer War between 1899 - 1902. The game consists of four phases, each of which is divided into 22 rounds. During rounds, players perform certain actions. The first and second phase of the game reflect the regular phase of the war. The third and fourth phases are constructed differently, because they represent a specific phase of guerrilla warfare.

The game uses the point to point system, six-sided dice and a deck of battle cards. The game map represents Cape Colony, Natal, Orange Free State and Republic of Transval. Each game phase corresponds to 3-9 months of real time. Military units (infantry, cavalry, artillery, tribals, machine guns, trains) are represented by abstract battle cards.
During the game the players will carry out a series of operations (move, fight, events, special actions) using random actions (1 to 3 on the turn of the game).
The introduced game events directly relate to historical events, directing the moves of players during the game.

The game tries to present the diversity of combatants tactics mainly through unit formations.
British units may perform weapon attacks and melee attacks. Boer units can only fire, but they start the game masked, moreover, some of them can benefit from the trenches. It makes it difficult for the British player who cannot shoot at masked units from a larger distance. The fieldworks allow the Boers to minimize their losses.

The game treats the concept of zone of control differently from other games – it gives up the obligation to stop moving the unit in the enemy ZOC. The ZOC is a phenomenon that allows to fire or initiate close combat, and it is dependent on the units formation and the range of its firearms.
Unit movement doesn’t differ from other hex-and-counter systems.