> Wargames>Wars of the XIXth Century>Strategy & Tactics 282 : War of the Pacific 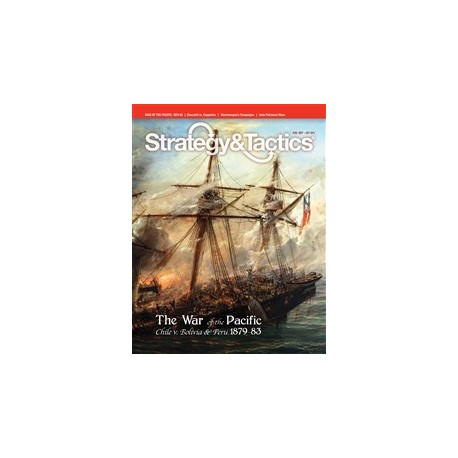 In this Strategy and Tactics magazine you will find historical articles and the wargame War of the Pacifiwith die cut counters.

More info about Strategy & Tactics 282 : War of the Pacific

War of the Pacific, Chile vs. Perú and Bolivia, 1879-1883 is a two-player, low-complexity simulation of one of the most decisive wars waged in South America during the 19th Century. This game simulates the conventional aspects of the war, from the outbreak to January of 1881 when the Chileans captured the Peruvian capital of Lima, and the guerilla war that followed, to the standoff that ensued to 1883.

The game consists of twelve game turns, each game turn representing approximately two months of real time. Each hexagon on the map represents approximately 31 miles (50 kilometers) from side to opposite side, and individual units represent battalions and regiments; naval chits generally represent individual ships.

Avis about Strategy & Tactics 282 : War of the Pacific