Against the Odds Annual 2016 - Confederate Rails 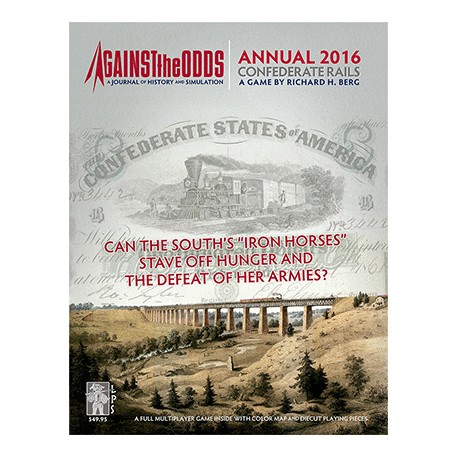 More info about Against the Odds Annual 2016 - Confederate Rails

In the spring of 1861 the American Railroad Journal predicted that the majority of the railroads would be unaffected by the Civil War, a mistaken prophecy, indeed.

Confederate Rails, designed by Richard H. Berg, is a unique type of railroad game. Players operate the historical railways of the Confederate States of America during one of the "hottest wars" of the 19th Century – the American Civil War - which ends up turning it into a kind of an "anti-railroad" game. Not only do players have to deliver goods, supplies and military loads during a difficult time, but they have to adjust to a dwindling rail network.

Yes, paradoxically each player's rolling stock and rail net are at their absolute finest on the first turn. From there on in the players (representing the South's various railroad companies) battle Union military advances, each other, Confederate government decrees (and neglects), the rapidly inflating and worthless money, plus wear and tear on irreplaceable equipment.

The system also contains far more “outside events” than most rail games... thanks to the war. As the tagline on the cover suggests, it becomes an increasingly against the odds situation to stave off hunger and defeat among the South's armies.

Bonus Game Inside!: This Annual also features an extra game. No Safe Harbor covers a little known, but devastating Japanese air attack on the port town of Darwin, in northwest Australia, that happened in February, 1942. This "mini-Pearl Harbor" proved to the Allies there was simply no place to hide. Replay this epic event with this exciting game!