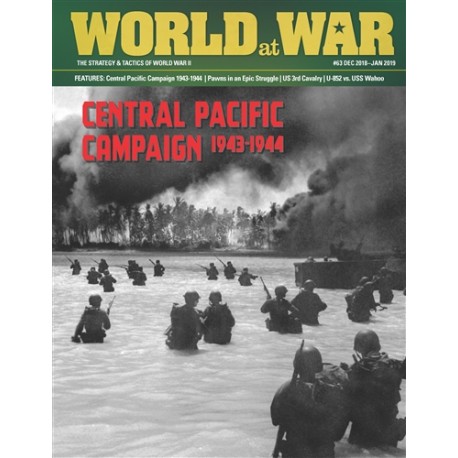 in this World at War magazine you will find historical articles and the wargame The Central Pacific Campaign with die cut counters.

More info about World at War 63 - The Central Pacific Campaign

The Central Pacific Campaign is a solitaire, strategic-level wargame of the struggle for control of the Central Pacific during World War II. The solitaire player is commanding the US forces and the system controls the Japanese forces. The player wins by accomplishing historic campaign milestones ahead of what was done historically, thereby opening the way for an earlier invasion of Okinawa or Formosa. Most ground units represent divisions, brigades or regiments. Aircraft units represent two groups or regiments (six to eight squadrons), and are each identified by the primary type of aircraft in those units. Ship units represent one fleet aircraft carrier, divisions of two light or escort carriers, two battleships, four cruisers, squadrons of six to eight destroyers and one light cruiser. The map is drawn to emphasize the strategically critical zones and islands in the Central Pacific. Each grid box on the map is 300 miles from side to side. Each turn represents one month.

Central Pacific Campaign 1943-1944: The Pacific Theater of Operations had reached an equilibrium by the spring of 1943. In the course of the next year the Allies would bring the war within reach of the Japanese Home Islands.