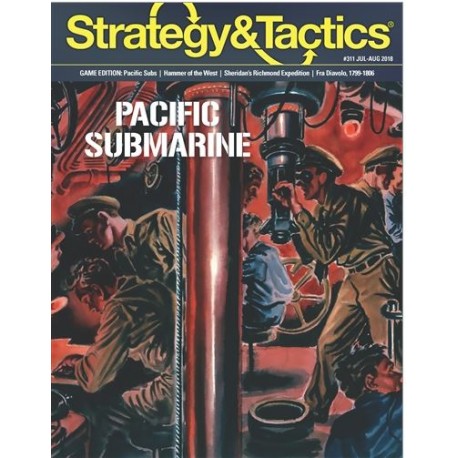 Pacific Subs is a solitaire game where the player is in command of an US submarine during the war of the Pacific.

Pacific Subs. Germany's U-boats are better known, but the US Navy's submarine fleet achieved the greater victory, bringing the Japanese Empire to its knees by hollowing out its merchant fleet. In this solitaire game, you the player represent the skipper of a submarine. Your task is to conduct patrols against the Japanese by supporting the US fleets in combat, ambushing Japanese warships, carrying out covert operations in Japanese territory, and sinking merchant ships and tankers. You can conduct one of several individual patrols, or fight the whole campaign, with a goal of promotion to Captain—if you survive.

Patrols are assigned by a die roll against a possible set of missions, but the set changes through the course of the war. In each, you move your boat across the situation map, that covers a quarter of the map, at 375 miles per hex, to the chosen island, ports, or shipping route. Some of the counters represent Japanese naval forces and installations, which you either seek or avoid depending on your mission. Each action covers 1-to-3 hexes and may result in enemy contact.

You decide whether to engage, and choose your boat's actions—depth, speed, course, and weapons—to hit the juiciest targets and avoid their escorts. At the end of the patrol, your tally is based on ships sunk and other mission parameters, less the damage to your boat. High scores result in promotion; low scores leave you beached.

Pacific Subs: During World War II, submarines made up less than two percent of the US Navy’s arsenal. Despite their small numbers, American subs sank over 30 percent of Japan’s navy and crippled their merchant fleet.